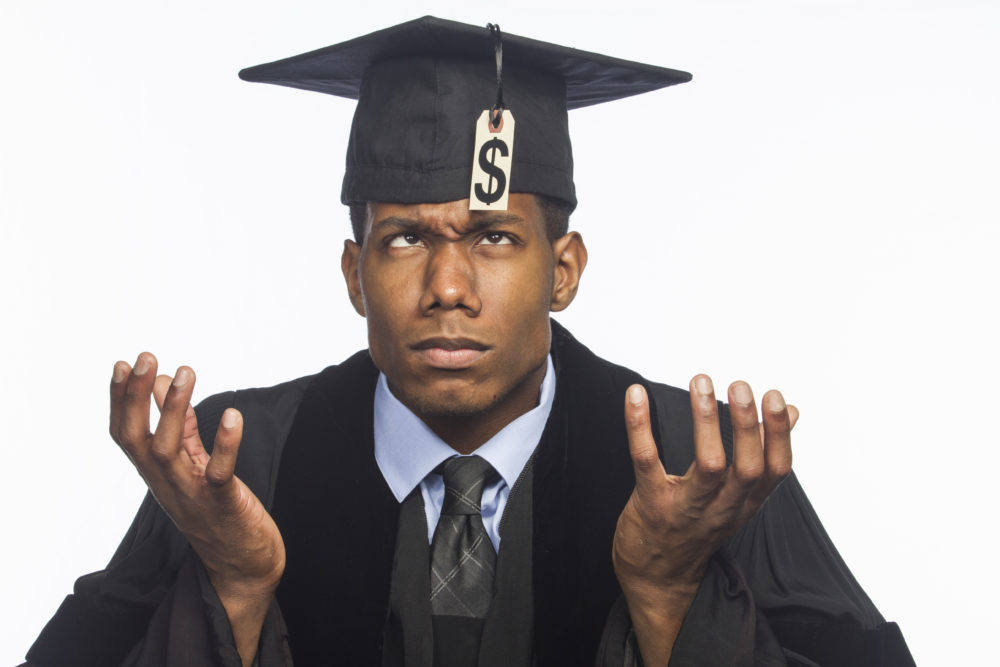 Bryan Mitchell has always taken pride in getting a good education. “College was the next step after high school. There was no question about it, no breaks in between,” says Mitchell, who holds a bachelor’s degree in business administration from The University of New Haven (UNH). But the cost of attending the private institution has left the 25-year-old saddled with $120,000 in student loan debt after four years.

Mitchell’s debt is a combination of money he used for UNH’s  tuition and fees, estimated at $15,000 per semester. All together he has two subsidized federal loans (through Sallie Mae) at 6.5% and eight unsubsidized bank loans with interest rates ranging from 2.5% to 9.75%. Each month he pays $700 toward the interest. The debts are nearly one-third of his $2,600 monthly net income.

With his large education debt, Mitchell isn’t terribly unique. As of June 2010, for the first time ever, Americans collectively owed more in student loans than in credit card debt, according to Mark Kantrowitz, publisher of FinAid.org and FastWeb.com. In August, Americans owed $826.5 billion in revolving credit accounts and about $830 billion in federal and private student loans.

Financial experts consider education loans to be “good debt” because students use the borrowed money to increase their earning potential. But student loans can be burdensome and can take 10 to 20 years to pay off. Today, the average college undergraduate leaves school with roughly $20,000 of loan debt while the typical under graduate student amasses debt ranging from $30,000 to $120,000.

A do-it-yourself attitude led to Mitchell’s whopping education debt. “I didn’t seek help from anyone, not my parents, no family or friends. I wanted to do things all on my own,” he says. “I have been really independent ever since I was a little kid.”

Mitchell began his path to college financing on the right foot: He filled out the Free Application for Federal Student Aid, the form financial aid offices use for awarding funds. His mistake, he now realizes, was that he didn’t actively seek assistance from his university’s financial aid department. A counselor there could have helped him investigate any loans, grants, and special programs for which he might have been eligible. Instead, he opted to borrow directly from various banks whose interest rates on student loans were relatively high.

Loans from private banks are attractive to many students because the application process may be easier, but in the long run, private loans are typically more expensive. Banks charge a higher rate of interest because the student doesn’t put forth collateral for the loan.

Mitchell isn’t making the same mistakes with his graduate education, which he hopes to complete by 2012. His employer is paying for his master’s degree in management from Saint Joseph College in West Hartford. He works full time as an admissions officer at Goodwin College in East Hartford, and he earns $40,000 a year after a recent promotion.

Aside from his student loans, Mitchell has no other debt. His 2004 Nissan Maxima, a gift from his parents, is paid for. Mitchell  who says he has maintained good credit habits since being approved for his first credit card at age 16,  has steered clear of high credit card balances. “I am really against using credit cards unless it is a big purchase,” he explains. “Usually, I try to pay it off quickly.”

Mitchell is committed to making lifestyle changes in order to take on his financial challenge. This means squeezing dollars wherever he can, including taking on a part-time job, cutting back on living expenses, and applying for tax credits on student loan interest payments.

He will also consult a tax adviser to see if he qualifies for any public service forgiveness programs or income-based repayment programs.

– Trim living expenses. Mitchell is currently renting a one-bedroom apartment at $600 a month. He has the potential to save $200 by getting a two-bedroom apartment at $800 a month and splitting that expense with a roommate. This would allow him to apply an additional $2,400 annually toward his student loan debt recommends Vicki R. Brackens, ChFC (chartered financial consultant), senior financial planner at Brackens Financial Solutions Network, an office of MetLife in Syracuse, New York.

– Boost discretionary income. Mitchell plans to earn an extra $200 every week working part time at his local gym as a personal trainer. Also, the recent promotion, which increased his annual salary by $5,000, gives him a chance to put roughly an additional $400 per month toward tackling his debt. He should use this money to pay down the loan principal, so that he is not only paying his required interest payments, advises Brackens. Mitchell should continue making the monthly $700 interest payment. To make extra principal payments, he should use the $1,400 he expects to have each month ($800 from part-time work, $400 from salary increase, $200 from rent reduction). Once he completes his master’s studies and receives another salary increase, he will likely receive an automatic raise in status and income–around $60,000 to $70,000 a year, according to his employer. Based on his original loan terms, his total payments would be $232,800 over 20 years. With the seven-year plan, his total would be $169,680, saving $63,120 in total loan payments, says Brackens.

– Pay down loan principals. While consolidation may bring more convenience and possibly lower the monthly payments, the long-range impact is an increase in the time period to repay the loan and an increase in total interest paid, explains Brackens. He should start applying extra payments to the principal of the loan that has the highest interest rate until it’s paid off. For example, he would pay $1,400 extra on his Sallie Mae (or SLM) private student loan for $6,723 at 9.75%. Then apply the extra $1,400 to his SLM private student loan for $4,652 at 9.75% and then the SLM private student loan for $26,781 at 8.75%, continuing to do this for the loan with the next highest interest rate until all 10 loans are paid off. But Brackens cautions that he must attach a separate check for the extra payment to a letter detailing he wants the money applied to the principal and which loan to apply it to; otherwise it will go to the interest, which is the typical policy of most lending institutions.

– Build a cash reserve. Mitchell should set aside $100 a month in savings. While his main goal is debt reduction, preparing for emergencies should never be forgotten, says Brackens. She suggests he add his $2,000 contest winnings to his $2,000 cash reserve. Also, he should move his savings into an interest-bearing money market account or high-yield savings account. In six years, (if the interest yield were 1.25%), Mitchell could amass more than $13,000.

– Stay put with 401(k) contribution. Mitchell should stay at the 5% contribution level for his 401(k) account and not worry about any other investments. Right now, if he dilutes his resources trying to achieve too many financial objectives, he will end up carrying debt for a longer period (and at a higher cost) than he needs to, says Brackens. At 25 years of age, Mitchell has a long time horizon that allows him to plow all available cash toward his debts. If he can get his debt to zero in seven years, he should have money to apply toward building an investment portfolio.

– Advice to others: Attending a state college or university may drastically reduce your cost. State schools provide residents with lower tuition rates and also offer state-based college grants. Also, after selecting the college of your choice be sure to visit or call your school’s financial aid office to get assistance with your  financing options.