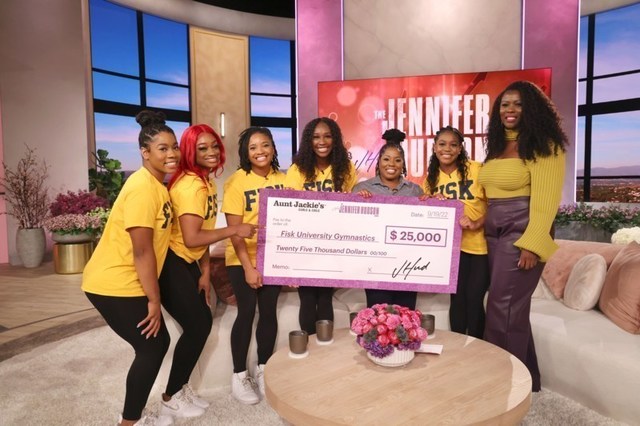 Recently, while on the Jennifer Hudson Show, the newly formed Fisk University women’s gymnastics team was surprised with a $25,000 check from Aunt Jackie’s Curls & Coils.

The donation will cover the 16-member team’s travel expenses enabling these talented student-athletes to attend national competitions. This team is the first intercollegiate gymnastics team in HBCU (Historically Black Colleges & Universities) history and will compete against colleges across the country. The women, prior to going on the show, were also treated to a full Aunt Jackie’s glam makeover and the studio audience all went home with $100 Aunt Jackie’s gift cards.

“Having the first HBCU gymnastics team means making history,” said Coach Corrinne Tarver. “We are paving the way for future gymnasts to be able to attend a HBCU and continue their gymnastics career; this donation means the world to us!” The university’s athletic programs are on the rise. The men’s basketball team, for example, is coached by former NBA star Kenny Anderson.

“Aunt Jackie’s is dedicated to the ongoing support of HBCU students, and we’re thrilled Fisk has launched the first-ever women’s gymnastics team,” said HBCU graduate Kendria Strong, chief marketing offficer at House of Cheatham, parent company to Aunt Jackie’s. “These students are the best and the brightest and it’s our honor to help lay the groundwork for their future success.”

In 2021, House of Cheatham gifted three million dollars to Clark Atlanta University to fund The Robert H. “Bob” Bell/House of Cheatham Center for Innovation and Entrepreneurial Development to support the education and growth of Black entrepreneurs. Bell, a representative and senator in the Georgia General Assembly from 1969-1982, built House of Cheatham’s brands into household names.