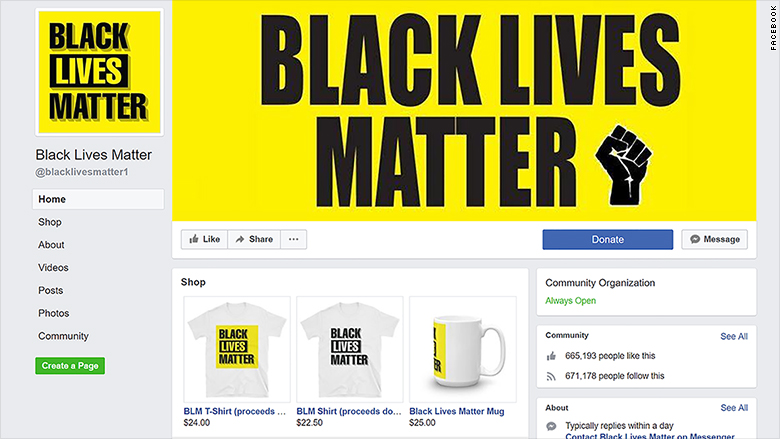 Screenshot of the fake Black Lives Matter Facebook page , which has since been deactivated. (Photo: facebook.com/blacklivesmatter1)

The biggest Black Lives Matter page on Facebook is a scam, linked to a high-ranking Australian union official, an investigation by CNN found.

Ian Mackay, the general branch vice president for Australia’s National Union of Workers (NUW), is one of two officials who have collected thousands of dollars in donations over the course of two years. Mackay, who works out of the union’s Perth office, has since been suspended pending the result of an investigation, ABC Australia said.

“The NUW has launched an investigation into claims made by a CNN report and has suspended the relevant officials pending the outcome of an investigation,” NUW national secretary Tim Kennedy said.

The fake Black Lives Matter page had amassed over 700,000 followers, dwarfing the 320,000 followers that the real page has on Facebook. The page was also tied to fundraising efforts that had raised close to $100,000. CNN learned that some of the money was transferred to Australian bank accounts.

“I haven’t seen the details of that report, but any sort of dishonesty or fraud of the kind that’s alleged is wrong—it would be illegal,” Australia’s Prime Minister Malcolm Turnbull said Tuesday.

NOTHING POLICE CAN DO

A senior Queensland police source told ABC Australia that “any local investigation of possible fraud would require a complaint” to be lodged either by those who donated money, or from a leader of the Black Lives Matter movement in the U.S.

“However, an alternative for local police would be to investigate possible money laundering under state or Commonwealth laws, which would not require a complaint,” the ABC report suggested.

Massler said a Facebook user named “Mai Lee” had posted a story from the Jackson Telegraph titled “Black Tuscaloosa man charged after making fist into gun shape & farting near officers” in a Black Lives Matter group that was linked to the fake BlackLivesMatter1 page.

Massler, who had read the story about fake black activist accounts and their links to the Russian government, reached out to CNN.

An independent investigation by CNN found that the scam was associated to a middle-aged white man in Australia. Alongside the Facebook page, the perpetrators also ran a “Black Lives Matter” Facebook group, which had close to 40,000 members—the biggest group professing to be associated with BLM.

The page consistently linked to blackpowerfist.com and blacklivesmatter.media, which Mackay had allegedly registered with his personal contacts appearing on the website’s registration records.

A few days after Mackay registered blackpowerfist.com, an anonymous Facebook profile under the name “BP Parker” shared a link to the website. This same profile was an administrator of the “Black Lives Matter” Facebook page until the page was suspended, a Facebook spokesperson has told CNN. Another anonymous account, under the name “Steve Parks,” linked to another site first registered by Mackay—again, just a few days after internet records indicate he registered it. As recently as last month, both BP Parker and Steve Parks were listed as administrators on the Black Lives Matter Facebook group tied to the Facebook page.

The people behind the fake websites and Facebook pages also encouraged people to donate through different online platforms, CNN found.

“Our mission is to raise awareness about racism, bigotry, police brutality and hate crimes by exposing through social media locally and internationally stories that mainstream media don’t,” a message on the group’s DonorBox page read.

“We have built a following through hard work, dedication and the generosity of supporters like you that pitch in what they can to help us promote or share our page and also pay to boost the stories the mainstream media try to suppress through paid ads,” it added.

Another fundraising campaign,”Education And Training Portal Sponsorship Fund” which DonorBox confirmed is run by the same people promised “online courses that educate people about the struggle of civil rights leaders and activists.”

An anonymous source familiar with some of the payments processed told CNN that at least one of the fundraising accounts was directly linked to Mackay by name. Another source told CNN that the group had raised around $100,000.

Since the inception of the Black Lives Matter movement, there has been many fake social media accounts that have popped up in efforts to disparage and dupe supporters of the movement.

“Unfortunately, our requests received no adequate response and many supporters continued to be misled. We are relieved that the fraudulent profiles have ultimately been removed and hope that the social media platforms will soon adopt protocols to stop this from happening again.”

Ahead of Mark Zuckerberg’s testimony before Congress, Facebook announced the launch of its Data Bounty Abuse program which will reward anyone who alerts the social media giant to situations of apps misusing data. It also unveiled new rules that’ll require people running large pages to verify their identity and location. The public relations offensive by Facebook and its executives comes after a former contractor at Cambridge Analytica revealed that the profiles of tens of millions of users were harvested in order to target the American electorate.

CNN’s report said it took nearly a week of emails and phone calls about its investigation before the fake BLM page was suspended and that was only because “it had suspended a user account that administrated the page.”

“We live in a digital world, and it’s extremely important that platforms like Facebook and Twitter do their due diligence with users so that supporters of our movement, and movements like ours, aren’t misled and that resources aren’t misappropriated. We regret that so many people were deceived by the recent high profile scam into believing that their gifts and donations benefitted us,” BLM said.