Ava DuVernay's 13th is the film we all need to see. NOW. 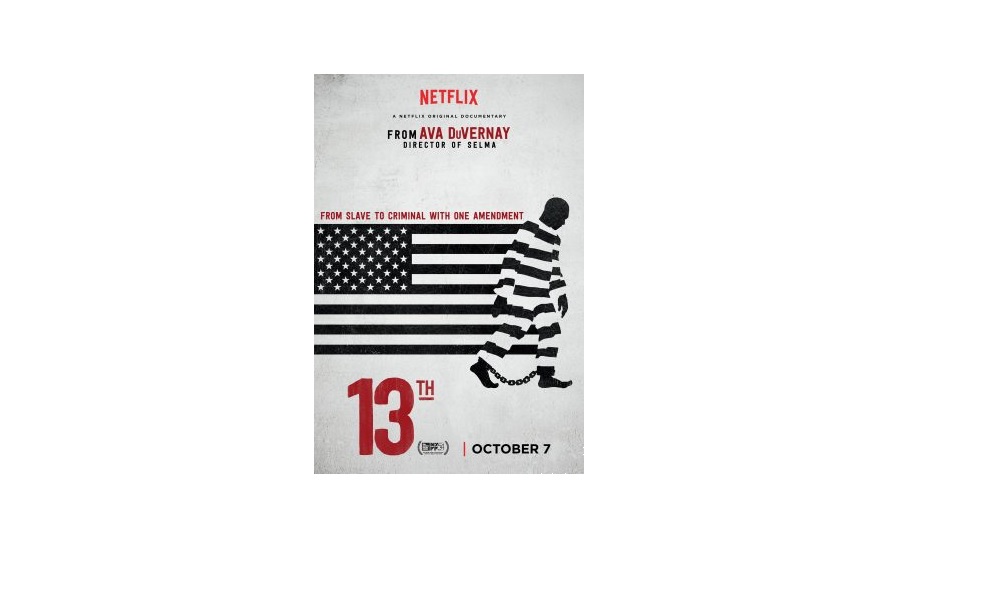 Ava DuVernay’s new documentary, 13th, now on on Netflix, is a film we all need to see. As the first nonfiction work to open the New York Film Festival, this jaw-dropping film shines a light on the evolution of mass incarceration in America; and equally critical, explores how this evolution wreaked havoc on communities of color ever since the end of slavery.

But why “13th”? The title refers to the 13th Amendment to the Constitution, which reads “Neither slavery nor involuntary servitude, except as a punishment for crime whereof the party shall have been duly convicted, shall exist within the United States…”

Using this second, qualifying clause as a connector, DuVernay, along with a host of historians, activists, and government officials, successfully lays out a timeline, underscored by commentary and facts that clearly provides context to her claim. The film brilliantly– through archival footage and testimonies from formerly incarcerated women and men–showcases how the clause not only led to the current horror that has become mass incarceration and criminalization of people of color, but also the privatization of prisons.

“The film clearly conveys the dramatic expansion of the prison population. After Nixon ran under the southern strategy to criminalize drug addiction, to criminalize the problems people dealt with in the face of continued discrimination and poverty, it was driven upward at such an exponential rate. Those policies were focused in many respects on African Americans and these communities have been targeted,” says Lisa Graves, executive director of Center for Media and Democracy.

While there has been a movement to ban private prisons for quite some time, the film, links the increased numbers in prison populations over time to the shifting corporate interests of the American Legislative Exchange Council. Also known as ALEC, this nonpartisan organization is made up of state legislators, and according to their definition, are dedicated to the principles of limited government, free markets, and federalism. Corrections Corporation of America, the country’s largest operator of for-profit prisons and immigration detention facilities, sat on that council.

“[Expansion] is occurring on a greater level, in part due to groups like ALEC and others who have injected a profit motive into this system and have distorted it beyond any recognition of a justice system,” adds Graves.

For DuVernay–as someone who grew up in South Central around progressive movements, who was an African American studies major at UCLA, and comes from a household steeped in black liberation theory–the investigation behind the ALEC was the most surprising. “ALEC really blew me away. I’ve seen the reports here and there but had not put it together that way in my own mind. It’s the part of the documentary I struggled with the most, outside of the emotional part of the violent footage.”

Since a number of published reports exposed the link between ALEC and private prison expansion, the commission has somewhat disbanded, but the effects remain. “ALEC has done nothing to repeal prison privatization laws, has done nothing to address the injustices called by forcing people into labor under the guise of training in order to enrich other companies, and nothing to repeal these underlying criminal justice provisions,” says Graves.

Malkia Cyril, executive director of the Center for Media Justice worked with DuVernay to use her film Middle of Nowhere to help reduce the costs of calls from prison. “The simple fact that there are new ways to extract labor from people, new ways to extract profit from people doesn’t mean you don’t care about their safety or freedom. You found a new way to extract labor and profit that does not require them to be in prison. The cost of prison is the issue here–not freedom, not justice, not rights.”

Cyril emphasizes that the relationship to criminal justice isn’t about justice, but about the economy and it’s about the larger subset of society. “It isn’t simply about cops or prisons. It’s about the role the state plays in controlling how we live and how we move,” says Cyril. “It’s about this whole idea of who a citizen is and who deserves to be a citizen. Where the borders are in our nation, in our communities, and our bodies. We have the right to define who we are by saying this is mine and you can’t violate it with a bullet or through the ballot. It advances the vision that black lives matter.”

“As a historian, or working with community groups or teaching, there is a sense of respectability politics when you have these high-profile cases of unarmed black men being shot. Somehow they deserved that or they should’ve just listened to the cop,” says Kevin Gannon, professor of history, Grandview University. “It is not the responsibility of those upon who the system is inflicting injustice to solve that injustice. It is the job of the people who are benefitting from those structures and system, and that is mostly white people.”

This underscores the fierce urgency of local involvement. “Local elections matter,” addsÂ Gannon. “It’s in the state legislatures where democracy dies in the dark. Unless we have a light on in the way this process works and we have the knowledge and understanding of what’s happening, then we can change it.”

For all intents and purposes, DuVernay masterfully provides an undeniable comparison between the current political environment and those of the past. “I could show where both candidates stood without showing the context of their candidacy because in their public lives they’ve each touched this issue in serious ways.” DuVernay references the fact that Donald Trump once called for the death penalty for the Central Park 5 who were ultimately innocent. Clinton, at one point in time, supported her husband’s crime bill and used the term “super predators. “This is years and years before anybody was thinking about being president. This is just part of the tapestry of talking about this issue.”

“I cried a lot making this film, says DuVernay. Watching 1,000+ hours of violent racist footage took its toll on the director, who went from directing Selma to 13th.

The film juxtaposes images of Trump saying ” In the good ole days they would pull them out of those chairs and put them on stretchers,” with modern day footage of individuals pushed out of his rallies. “The whole film is about callbacks to history, knowing that this present moment isn’t isolated. It is a part of a legacy; an insidious violent legacy that’s generations old,” says DuVernay.