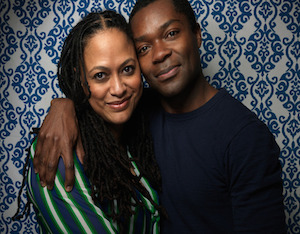 Paramount’s Selma made a splash Tuesday night at the 2014 AFI FestÂ where it drew a standing ovation.

The civil rights drama stars David Oyelowo and Carmen Ejogo as Dr. Martin Luther King Jr. and Coretta Scott King. Together, they help lead a non-violent stance against racism from Selma to Montgomery, Alabama, in 1965 after facing resistance from Gov. George Wallace, played by Tim Roth.

Oprah Winfrey, who plays an as-yet-to-be revealed character, is a producer of the film. During the AFI Fest sit-down chat, Winfrey admitted that Oyelowo was the reason she boarded the project. The two starred together as mother and son in Lee Daniels’ The Butler, but Winfrey had her doubts that Oyelowo could pull off playing Martin Luther King Jr.

Oyelowo never faltered in his belief that he was the right man for the role. In fact, an interesting admission found Oyelowo speaking faith into his future from the past. “On July 24, 2007, I was told from above that I would play this role. The director at the time didn’t agree with my higher power,” said Oyelowo, who delivers an outrageous job in the role.

During the chat, the OWN Network CEO also flashed back to when a white extra expressed nervousness about using a racial epithet. DuVernay, who has been on a hot streak with her previous films Middle of Nowhere and I Will Follow, explained that it was “a necessity” for the white extras to express vitriol and rage. She also noted that the non-professional extras used in Alabama for filming did not hold any racist beliefs.