4 Baby Names Inspired by the Olympics 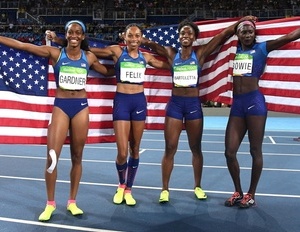 The world may be (rightfully) obsessing over the Simones–Olympic championsÂ Simone Biles and Simone Manuel. But they weren’t the only black women athletes bringing home the gold in Rio. So, if you’re looking for baby names inspired by the Olympics, and you don’t want your daughter to be one five Simones in her kindergarten class, here are a few other namesÂ to consider:

As if it wasn’t already the name of your favorite princess, the name Tianna got a greater boost, after gold medalist Tianna BartolettaÂ stood atop the podium twice in Rio–once for the women’s long jump, and once for the 4×100 meter relay. And if that wasn’t impressive enough, she won gold in the 2012 Olympics in the same relay and later that year made the U.S. bobsled team!

As an editor, how could I not love such a linguistic name? One of Tianna’s teammates in the women’s 4×100 meter relay, English Gardener, almost saw her Olympics end in tragedy, when Allyson Felix dropped the baton pass to her in one of the preliminary heats. But Team USA’s protest that they were bumped by another runner was granted, and English eventually helped the team win gold–even while wearing borrowed shoes.

In Rio, boxerÂ Claressa Shields successfully defended her title from the 2012 London Olympics in the middleweight division, making her the most successful Olympic boxer in U.S. history, as the first American–male or female–to win back-to-back gold medals in boxing. And she’s only 21, which means we could see her go for the gold again in Tokyo.

If you’re looking for more traditional baby names inspired by the Olympics, but maybe one with a less common spelling, consider Ashleigh Johnson. The goalkeeper is the first African American to play on the U.S. women’s water polo team, which has now won gold in the last two Olympics. And there may be a family dynasty in the works–Ashleigh and her younger sister, Chelsea, both play water polo at Princeton University.