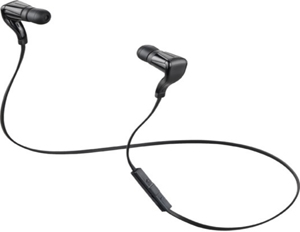 Step into any airport and you’ll find no shortage of business travelers with Bluetooth headsets lodged in one ear. And that’s good and bad if you like music with your voicemail.

Fortunately there are stereo Bluetooth headsets that do an admirable job of balancing high-fidelity music playback with decent voice reproduction–and look professional too. Two options spotted at the 2013 International CES in Las Vegas include the $80 BackBeat Go from Plantronics and the $100 Able Planet True Fidelity BT400B Wireless Headset.

Connecting either headset to a Bluetooth-compatible smartphone or MP3 player is a simple one-time process. Once connected, both units let you pick up and end calls and start and stop music playback from headset controls.

The stringy BackBeat Go looks like little more than two earbuds connected by a wire, but the earpieces and tiny inline volume control incorporate Bluetooth wireless circuitry, a microphone and a small battery which recharges via a microUSB slot. According to Plantronics, the battery provides up to 4.5 hours of listening and talking per charge.

When tested, music playback with the BackBeat Go was smooth and enjoyable with moderately deep bass and ample treble response. Thanks to the passive noise cancellation provided by any in-ear headset, phone calls were very easy to hear, even in noisy environments.

However, since the microphone is in the inline remote, leaving it hanging behind your neck isn’t the best placement if you want the people at the other end to hear you. Routing the wire in front of you or using just one earpiece and letting the unit dangle seemed to work better for phone calls. The buttons in the inline remote control are small but fairly easy to master. A long press of a side button turns the unit on or off or starts the pairing process.

The Able Planet True Fidelity BT400B is a more conventional folding headset which fits comfortably on the ears and behind the neck. This setup makes for a comfortable fit, but leaves the microphone near the ears and some distance from your mouth. While using the unit for phone calls some listeners said voice quality was a little cloudy, but intelligible.

The larger size of the Able Planet True Fidelity BT400B allows for a larger battery, which the company says will last up to 15 hours of talk and listening time. The USB charging wire has a non-standard plug at the headset end, so don’t leave it behind when traveling.

The Able Planet BT400B excelled with music playback, providing ample deep bass and reasonable high notes. The volume and media control switches are easy to find without looking, but the on/off/pairing button was a little stiff, requiring a solid push to engage.

Both units are black and unobtrusive. Neither should cause your boss to ask, “What’s that on your head?â€ And that’s a good thing if that Stevie Wonder classic is still playing.