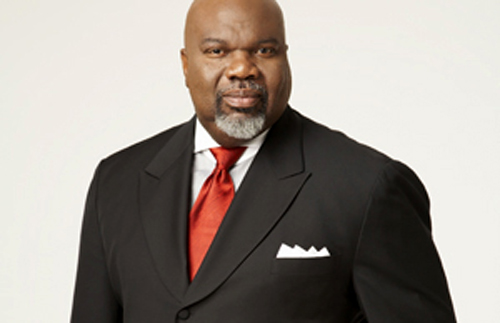 Widely known as senior pastor of the Potter’s House, a nondenominational megachurch in Dallas, Bishop T.D. Jakes is also a respected entrepreneurial trailblazer. As CEO of TDJ Enterprises L.L.P. (previously T.D. Jakes Enterprises Inc.), Jakes is a New York Times best-selling author; founder of the Grammy Award-winning record label Dexterity Sounds; and founder of his own film company through which he’s produced three faith-based films, including his new release, Jumping the Broom, in theaters May 6th. Jakes, 53, spoke to black enterprise about the role faith plays in Hollywood and how he hopes his films will change “the Hollywood machine.â€

Hollywood has a reputation of being what some call spiritually bankrupt.
I’m glad you [mentioned] that. I think it is always bad when you make generalizations about any people or group. I found quite a few actors and actresses in Hollywood who have faith. To those who think Hollywood is a dark place, I say bring some light. Let’s not evacuate, let’s infiltrate, let’s get involved. If we really believe that we’re the salt of the earth, let’s be sprinkled in every arena and represented there, because Hollywood, like social networking, like a telephone, is a means of communication. Let’s communicate with that because it’s available to all Americans.

Has the industry’s attitude changed toward faith-based films, especially
with the success of Tyler Perry’s films and Mel Gibson’s The Passion of the Christ?
Mel Gibson and The Passion of the Christ showed that there is an audience out there and they are underserved. I think the delineation is in part faith, but it’s also generational. [Hollywood] has a propensity to use sci-fi flicks to cater to younger people, and intense drama that maybe 20- to 30-year-olds might like. But then they began to see that there was a strong niche for family-friendly films for African Americans. I think that was a wake-up call. I shot Jumping the Broom for around $7 million. Although that’s not a big budget for Hollywood, for a film of that genre, from the faith community, it is the largest budget that has ever been extended to date. I think that shows Hollywood’s growing commitment and respect for [faith-based] films.

So, why do so many Christian films go straight-to-DVD?
We need to impact opening weekend. Whether they come from the faith community or the African American community, if they really want to educate Hollywood, they have to understand that these films need their support the first weekend. Hollywood as a whole is only looking at opening weekend. So if you want to continue to give people of color jobs, and [put out] positive messages that are entertaining for families, and let us develop other films with larger budgets, then we need to impact opening weekend.