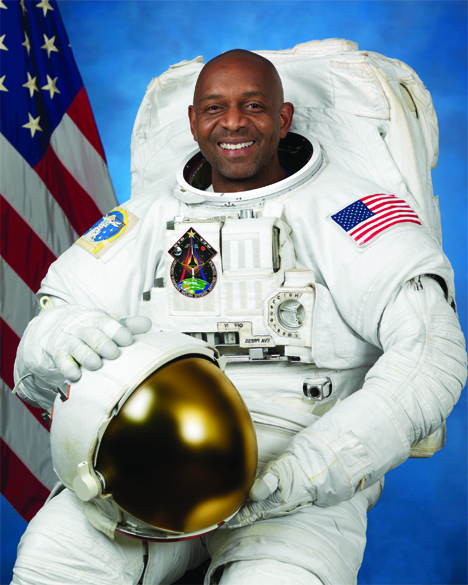 DR. ROBERT L. SATCHER JR. DEVELOPED AN INTEREST in space as a youngster after watching footage from one of the Apollo missions as well as the Star Wars films and Star Trek series. Of the thousands of applicants to apply for NASA’s space core program, which accepts applications only every four to five years, Satcher was the only African American selected in a class size of 14 in 2004. In November 2009, the Hampton, Virginia, native completed three space walks as part of the 11-day Atlantis mission. On his third walk he helped install an oxygen tank and delivered more than 12 tons of supplies and equipment to crew members stationed at the International Space Station.

The 45-year-old married father of two caught up with black enterprise to talk about the opportunities for youth in science, technology, engineering, and mathematics, or STEM.

Even with prominent African Americans in high-ranking positions, such as President Obama and NASA Administrator Charles Bolden, do you feel that some youth are still limited in thinking about what they can become?
A lot of kids haven’t really been exposed to all the possibilities available to them. When I talk to kids they always want to be someone in the entertainment industry or an athlete. They don’t even consider getting a college education. A picture is worth a thousand words; it’s human nature that if you see someone who looks like you and is doing it then it becomes a possibility for you. Showing some living examples and the benefits of getting an education in the STEM areas has an impact on kids–it shows them that it’s definitely a possibility.

What can we do to get parents focused on STEM studies for their children?
My parents’ generation was much more dedicated to education. From the time I could remember, they were always preaching that message. Unfortunately, we’ve kind of lost the tradition of really wanting to excel in math and science. I don’t know what we need to do to get parents today to buy into the notion that it’s important to educate their children outside of repeating the message as often and as prominently as we can. Fortunately the current administration is putting resources in the direction of STEM, so hopefully we’ll see that.

How does the lack of African Americans in STEM areas affect our ability to be competitive in the global marketplace?
It’s either get your act together so that you can get in the game, or you’re going to watch things pass you by. The STEM areas are going to play a central role in how the world develops. Technology is obviously a big driver for industry as a whole. At NASA we’re defining what we’ll be doing over the next decade in terms of deep space exploration, and there is going to be a legacy that grows out of this which is important for us as a nation and for the planet for the next 50 to 100 years. It’s a very important time, and I think African Americans in general should–and I try to remind them of this–we really need to be paying attention right now to what’s going on. It’s an opportunity that will pay dividends for years to come.

Do you think HBCUs should be the driving force behind STEM studies?
Of course they should push STEM studies. HBCUs have served a role of providing opportunities in some cases where people would not have had them, and giving second chances to African Americans who the system had already given up on or turned its back on. It’s especially true for them that this message needs to be propagated. So they have a special responsibility that way, and I’m sure they’ll rise to the occasion.