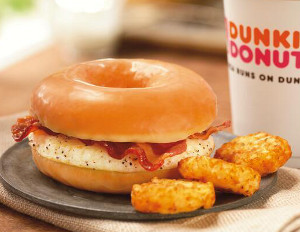 The sandwich, made with fried eggs and bacon placed between a glazed doughnut, will become a part of the permanent menu starting June 7, “National Donut Dayâ€.

Dunkin’ Donuts already tested the sandwich in stores in eastern Massachusetts in April, creating buzz all over social media. The doughnut sandwich clocks in at 360 calories, which is less than the 390 calories for the turkey sausage sandwich it recently introduced.

Participating Dunkin’ Donuts restaurants nationwide will also offer guests a free donut of their choice (while supplies last) with the purchase of any beverage on National Donut Day. This special donut offer is also available to Dunkin’ Donuts guests in 31 countries across the globe, marking the brand’s first-ever worldwide donut celebration.

National Donut Day, celebrated on the first Friday of June each year, was originally established in 1938 by the Chicago Salvation Army to honor women who served donuts to soldiers during World War I. According to John Costello, President, Global Marketing and Innovation at Dunkin’ Brands, “it’s the perfect day to celebrate the joy that donuts bring to people each and every day.”

“Perhaps more than any other treat, donuts bring smiles to people’s faces and make any moment in a busy day much sweeter. As the country’s donut leader, we’re proud to once again help people celebrate National Donut Day by enjoying a free donut at Dunkin’ Donuts with the purchase of any beverage,” he said.