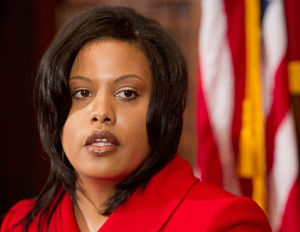 In a case where life is imitating art, Baltimore, Maryland, a former murder capital, will enforce the strictest curfew for young people in America.

Mayor Stephanie Rawlings-Blake, a Democrat, is faced with increasingly high crime rates. Appearing in front of her Baltimore residents on Tuesday, July 29, Rawlings-Blake explained intently the new rules regarding the young citizens in the city and the proposed curfew.

Going into effect on Aug. 8 all-across the city, police and concerned civil libertarians believe that such a move will turn the city’s youth into harbingers of criminality. Mayor Rawlings-Blake disputes that the curfew will not criminalize children, but instead remove them from the nighttime criminal element and place them and their families in touch with social services agencies.

“If you want to have your kid run amok 24 hours a day, go live out on a farm somewhere,” the mayor proclaimed back in May. “This is a city and we are going to make sure that we keep our kids safe.” This evening at the University of Baltimore, the mayor will hold an open door meeting to field questions from residents about the proposed law.

If enforced, the curfew will make it a violation for a youth under 14 to be outside the home after 9 p.m. year-round. Those who are 14 to 16 would be banned from being outside on school nights after 10 p.m. and on other nights after 11 p.m. Police would be responsible for taking any would be violator to a curfew center. Upon their parents arrival, a choice would have to be made: take a city-approved counseling class or face a $500 fine.

Baltimore is one of the many U.S. cities with curfews, as the mayor’s statistics are showing that homicides for the year are down 14% Â from the same period last year, and violent crime had fallen 15%. The ACLU (American Civil Liberties Union), as well as the Fraternal Order of Police, both argue that tougher curfews will be ineffective and increase burdens on officers who are given too few guidelines about how to enforce it.