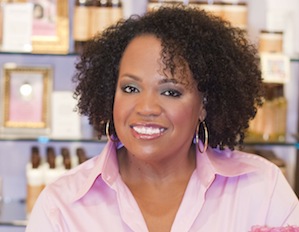 Carol’s Daughter CEO Lisa Price has spoken out after reports swelled that the company was filing bankruptcy and five of Carol’s Daughter stores had closed their doors. Price wrote an open letter to help alleviate customers concerns, asserting that the black-owned all natural hair, body, and skincare brand is still strong and in business. Price wanted to clarify that even though the stores were closing down the company wasn’t shutting down.

“It is important to set the record straight. Carol’s Daughter is still going strong after twenty-one years and the future has never looked brighter,â€ Price wrote. “As part of our increased focus on retail channels, we have decided to close five of our stores. This was portrayed as if we are having some challenges, but nothing could be further from the truth.â€

Before the bankruptcy filing, the company closed all but two of its seven stores and terminated 29 of its 42 employees. It hopes to use the time in Chapter 11 to reorganize and consolidate operations around the two stores that will remain open, one in Brooklyn and the other in Harlem. Products will continue to be sold in such retail outlets as Target, on the company’s website, and through third parties such as the Home Shopping Network.

Price went on to note in her statement the valuable partnerships the brand has that have enabled her to distribute Carol’s Daughters in more than 2,5000 stores and on direct TV which is far beyond the reach of her living room.

Carol’s Daughter started as a home-based business in 1993 with Price making beauty products by hand in her kitchen and selling them at local flea markets. Her first stores opened in Brooklyn in 1999 and she opened her second store in Harlem in 2005. Record executive Steve Stoute led a group of investors in raising $10 million for Carol’s Daughter rapid expansion. Celebrity investors included Jay-Z, Mary J. Blige, and Will and Jada Pinkett Smith.

In fact, Pinkett Smith spoke out in defense of Carol’s Daughter and its line by posting a picture and a statement on her Facebook page. “I know you all often see my hair in various ways, but what you see in those pics is my natural hair. I’ve taken care of this mane with Carol’s Daughter products for over 15 years, specifically Lisa’s HairElixir. With that said, Carol’s Daughter is still going strong, despite some misleading press, so much so you can now find it in Target, on HSN, Ulta and Sephora inside JCPenny. My hair would like to say thank you to Lisa Price of Carol’s Daughter for making products that actually nurture and the scalp and hair. —Jâ€ 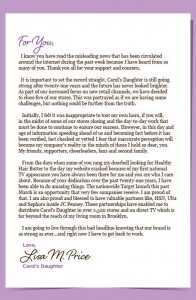