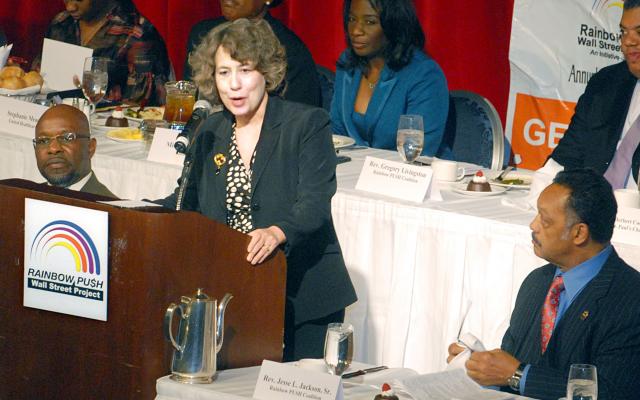 While some worry about the 25 bank failures which occurred in 2008 due to toxic subprime loans and an unsolvable credit market, others know that when the dust settles, African Americans would have lost more money to foreclosures during this economic tsunami than during any other time in history.

“We have to fix housing first to put us on the path to economic recovery,â€ said Sheila C. Bair, chair of the Federal Deposit Insurance Corp. at a luncheon today sponsored by the Rainbow PUSH Coalition.

Michael D. Mitchell, the vice president of fair lending for the National Community Reinvestment Coalition said during a PUSH workshop that fixing the problem will require greater access to capital for African Americans who oftentimes were excluded from prime loans ands steered into subprime loans.

“The solution to exclusion is not to come up with a system that is going to penalize, extract wealth and extract equity from people. It is to allow everybody to get the fundamental right to prime like capital for mortgage financing,â€ said Mitchell.

The workshop, Wall Street and Main Street Solutions to the Foreclosure Tsunami, and luncheon was part of the 12th Annual Rainbow PUSH Wall Street Project Economic Summit, which ends Friday in New York.

Solutions to the foreclosure dilemma seem to escape many as the problem gets worse with each passing month. During the third quarter of 2008, 171 institutions were on the FDIC’s guarded watch list of troubled banks, said Sandra L. Thompson, director of the FDIC’s division of supervision and consumer protection.

However, failure may have put IndyMac Federal Bank, which imploded, back on the right track. When IndyMac went down it was inherited by the FDIC. The IndyMac model for troubled mortgages, created by the FDIC, has helped homeowners complete sustainable and affordable loan modifications. Last year they sent letters out to 240,000 borrowers about their services, and modified 8,500 loans using a combination of methods including extended amortization, principal forbearance, and several streamlined approaches to try to bring the borrowers’ loans to within 38% of gross income.

“We think that similar approaches need to be applied in a broader industry-wide scale,â€ says Thompson. The FDIC program called “Mod in a Boxâ€ provides a framework for implementing similar programs at other institutions. It outlines FDIC program terms at IndyMac and offers insight into the specific portfolio characteristics that drive modification modeling at that bank.

Unfortunately, homeowners are sometimes too ashamed to ask for help. Bank of America has been doing everything in their power to let homeowners know that their company is offering foreclosure relief. In some cases they have offered three to six month forbearance packages, which temporarily relieve homeowners of payments.

“Get in touch with your servicer or contact a counseling agency. If you contact the servicer and explain the hardship that caused a homeowner to get behind then they will be