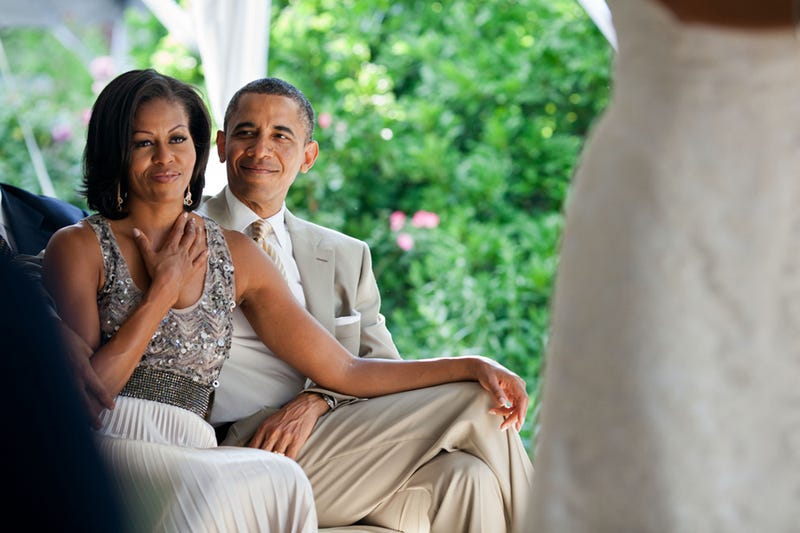 Attendees of the African American Film Festival at Martha’s Vineyard received quite the surprise when former President Barack Obama and former First Lady Michelle Obama made an appearance on Aug. 5. According to Variety, the Obamas were on hand to discuss their new documentary on Netflix, Descendant.

Descendant is directed by Margaret Brown through the Obamas’ production company, Higher Ground Productions and tells the story of the last known slave ship to bring people from Africa to the U.S., the Clotilda. The film, which won the creative vision U.S. special jury award at Sundance, focuses on the descendants of the Clotilda in Africatown, Alabama.

The Obamas were introduced by one of the documentary’s executive producers, Questlove, and spoke for approximately 15 minutes about the film while noting the importance of revealing Black history that is frequently untold.

“When we screened this… we looked at it and immediately thought, ‘This is why we’re doing Higher Ground.’ Because what we know about our history as Black people, we don’t talk about nothing,” said the former First Lady. “We can’t get anything out of our elders, can we? We don’t know anything. Our mothers don’t talk about menopause, nobody knows about why grandma and grandpa got divorced,” she said.

“We just don’t talk. And there’s a lot of psychology around that, but what this film reminds us of is the power that our stories have. And we have to tell that truth.”

Mr. Obama spoke of the power of storytelling and praised the founders of the Martha’s Vineyard African American Film Festival, Stephanie Rance and Floyd Rance.

“When we left the White House, Michelle and I talked about the things we wanted to do post-presidency. We’ve got a lot of stuff going on, but one of the things that we learned both when we were campaigning for office and taking office was the importance of stories and who tells stories and what stories are valid and what stories are discounted,” he said. “And it’s one of the powers of this festival, and the work that the Rances have done is to lift up stories that too often have been lost in the flow of time. Because we believe that everybody’s stories matter,” he said.

“Everybody’s got a sacred story that motivates us, moves us. It’s not just a matter of nostalgia, it powers us into the present and the future.”

Also seen at the film festival were Rev. Al Sharpton, Stacey Abrams and Keisha Lance Bottoms. Sharpton was at the event to premiere Loudmouth, a documentary about his life as an activist.

The 2022 Martha’s Vineyard African American Film Festival is running from Aug. 5 until Aug. 13.