Where Was President Obama on Wednesday Night? [Column] 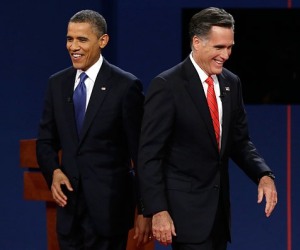 My thoughts as far as the first presidential debate, yes, Mitt Romney did a good job as far as posturing and looking formidable.

He looked hesitant, not as confident as we are used to seeing and lacked the passion I’ve seen from him over the past 5 years.

Does this change my outlook and vote?

Not at all, but I would have liked to see the president hitting some balls out of the park or at least getting on base. He looked like he was just at the plate, looking at pitches and not really trying to make an impact on the game. No, I don’t think he was bad, I just feel like he wasn’t as good as he has been in the past. I’ve noticed some pundits and Obama’s team is making excuses for him. Now is not the time for that. Just brush yourself off and get back in the game and play like we anticipate! Derek Jeter is a great baseball player but he also has had some bad games. That doesn’t take away from his greatness, so, one debate shouldn’t make President Obama a horrible choice to keep his job!

People, especially Blacks, will differ on his performance the other night. Some will feel he did enough to warrant a return trip to The White House, but, we know he can and has done better in debates. The expectation, at least from me, is that he will have the fire of Michael Jordan coming off of a bad loss. And we all knew when Jordan had a bad game, the next game he had the potential to score at will and make all the plays necessary to, not only win the game, but make it that much more exciting.

Can anyone remember Michael Jordan having 2 consecutive bad games?

This is what I am anticipating from President Obama in the next and the last debate! I expect Obama to give the best debate we have ever seen from him in the next round.

I don’t need to get into the specifics of what I feel he did wrong or what he should have done, there are plenty of you out there already doing that. All I need to know is that he will come back with the fire and explosion that I have come to anticipate from Obama.

Remember, as it has been pointed out in the media, 2004 Democratic Presidential Nominee, John Kerry, won the first debate against George W. Bush, but he lost the election to former President George Bush, who was easily re-elected.

History will repeat itself….