Baron Davis is the Gift that Keeps on Giving 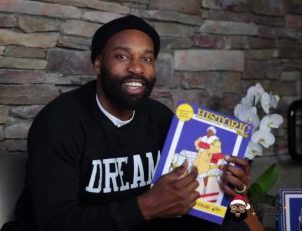 During the holiday season, Baron Davis launched Black Santa, which gave us all the feels. He represented the cool, a Santa that was relatable to modern pop culture, who rocked black kicks, black frames, and a large smile, all while spreading positivity and cheer.

Well, fast forward to a few months later and the Black Santa Co. is back at it again. This time, they are showcasing a coloring book that will teach you all about the African American figures that school did not.

“The families (behind the historic leaders) have expressed a great appreciation for recognizing our African American heroes that don’t normally get the spotlight,â€ Davis told Black Enterprise.

What’s also refreshing is that, in this case, the kids don’t get to have all the fun. “We’ve had a couple of coloring parties during the day, for the kids and we’ve had wine and coloring for the adults,” said Davis. “We’re also getting ready to do a big thing for the Essence Festival.â€

In addition to the coloring book, Davis has launched the Dream Collection, inspired by Dr. Martin Luther King Jr., to highlight what it means to dream. “We took the Dream King and Queen concept and focused on positive affirmation. We want people to know where they come from so they know where they have the potential to go,” expressed Davis. “The merchandise is something that we enjoy having and creating as a brand so that we continue to have that billboard of positivity flowing throughout the community.â€

And if that’s not enough, “we also have Cecilia or Mrs. C. as she likes to be called, who’s the wife to Black Santa. She’s super cool. We liken her to the females of today: positive, strong, and self-confident. Her whole mission is focused on health, energy, wellness, and loving yourself, no matter who you are,â€ said Davis.

So what is Davis doing when he’s not spreading positivity and joy? He is also appearing on TNT’s new show, Player’s Only, and if you look closely, you may even catch a glimpse of Black Santa.

The coloring book can be found on Amazon.com and Blacksanta.com

Wait, did you think we were done? Nope. Davis can’t be the only one with the new job. If you’re an artist, writer, developer, or gamer, who can see yourself as a part of the Black Santa team, feel free to send over your body of work to elves@blacksanta.com (Serious inquiries only).

Tis’ the Season, all year around.