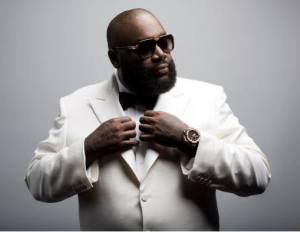 Growing up in Carol City in Florida, who did you look up to in business—in terms of being an entrepreneur. And did you have a mentor?

When I was coming up, it didn’t matter to me if you owned a car wash or if you owned your own record label, I just looked at it all a little different. If you found a way to get by, I always looked at you as a winner. Because I saw so many people that were failing just at living versus building something where you could actually go and invest in an idea or a dream, that was always big to me, and I always respected that. So it most definitely began locally and then I just started being cognizant. Everywhere I looked, I would find something to marvel at and be like, “I see what he’s doing.”

Did you dream first about being a businessman or a music mogul or vice versa?

I believe it was all one. I believe me being the artist that I am, that’s what really comes with it—you know the energy that I try to channel into music and when I’m screaming, “Bawse.” I believe that’s all a part of the energy that I want to put out as one of the things I admire the most which is being an owner.

Speaking about being an owner, you own about 25 franchises of Wingstop. How did you decide on this brand of wings, and who do you rely on to manage them? I know the Bawse isn’t walking around hiring and firing people at Wingstop.

I feel what makes a great ‘bawse’ is someone that can put a great team together. And that’s what I’ve been blessed with. You know, from my sister and my mom, I keep my family involved in everything I do as well as everybody else that we brought along on the team. We really became a beast. And for me, purchasing my first Wingstop just as a fan of lemon pepper chicken wings, six months later I sat back, and I said ‘Whoa, this is something serious. We need to take this a lot more seriously. Let’s invest more time and more energy in it,” and then it just really exploded. I feel like I’m part of something new, something youthful, and I’m introducing it to a lot of people who’ve never tried it. So that’s the energy I get in return as well as what comes along with its success.

Check out part two tomorrow, as Rick Ross talks more about his life, how he got started, his business interests in Nigeria, the artists on his label, and much more in part two of our exclusive interview.