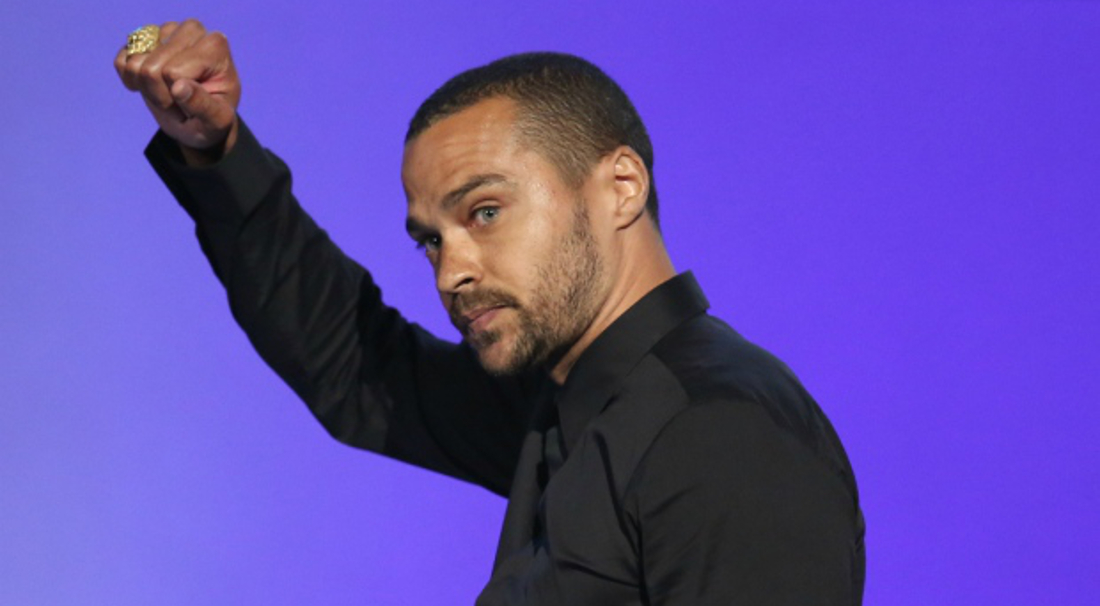 Jesse Williams, actor/activist, accepts the humanitarian award at the BET Awards at the Microsoft Theater in Los Angeles on Sunday, June 26, 2016.

Grey’s Anatomy actor and social activist Jesse Williams prophetically addressed America during his awards speech at the 16th annual BET Awards on June 26, at the Microsoft Theatre at L.A. Live. Presented with the Humanitarian Award by BET Chairman/CEO Debra Lee, Williams used the stage to deliver an inspiring and fiery speech directly aimed at the injustices black people in America suffered from—and still suffer from—and what needs to take place in order for this to change.

Williams is no stranger to social activism and puts action behind his tweets and social commentary. He has written extensively about the Black Lives Matter movement and was also an actor and executive producer of Stay Woke, a documentary about the movement that premiered in May. He joined protests in Ferguson, Missouri back in 2014 to protest the shooting of Michael Brown. Most notably, Williams also met with President Obama earlier this year to discuss his humanitarian work.

It’s safe to say that the actor and social activist stole the show, as every word was effectively communicated with style and grace.

Here is Jesse Williams’ full speech from the 2016 BET Awards:

Williams’ began his awards speech by thanking BET and all involved in the video production that played on the screen before he appeared. He thanked his wife and his parents for “teaching me to focus on comprehension over career, they made sure I learned what the schools are afraid to teach us.”

“This award is not for me,” he emphasized. “This is for the real organizers all over the country, the activists, the civil rights attorneys, the struggling parents, the families, the teachers, the students that are realizing that a system built to divide and impoverish and destroy us cannot stand if we do. It’s kinda basic mathematics: the more we learn about who we are and how we got here the more we will mobilize.”

“This award is also for the black women in particular who have spent their lives nurturing everyone before themselves—we can and will do better for you.”

“Now, what we’ve been doing is looking at the data and we know that police somehow manage to de-escalate, disarm, and not kill white people every day. So what’s going to happen is we’re going to have equal rights and justice in our own country, or we will restructure their function and ours.”

“I got more, y’all. Yesterday would have been young Tamir Rice’s 14th birthday, so I don’t want to hear any more about how far we’ve come when paid public servants can pull a drive-by on a 12 year-old playing alone in a park in broad daylight, killing him on television, and then going home to make a sandwich.”

“There has been no war that we have not fought and died on the front lines of. There is no job we haven’t done, there is no tax they haven’t levied against us, and we have paid all of them.”

“Let’s get a couple of things straight. The burden of the brutalized is not to comfort the bystander—that’s not our job so let’s stop with all that. If you have a critique for our resistance then you’d better have an established record, a critique of our oppression.”

“If you have no interest in equal rights for black people then do not make suggestions to those who do: sit down.”

“We’ve been floating this country on credit for centuries, and we’re done watching and waiting while this invention called whiteness uses and abuses us, burying black people out of sight and out of mind while extracting our culture, our dollars, our entertainment like oil—black gold!—ghettoizing and demeaning our creations and stealing them, gentrifying our genius, and then trying us on like costumes before discarding our bodies like rinds of strange fruit.”