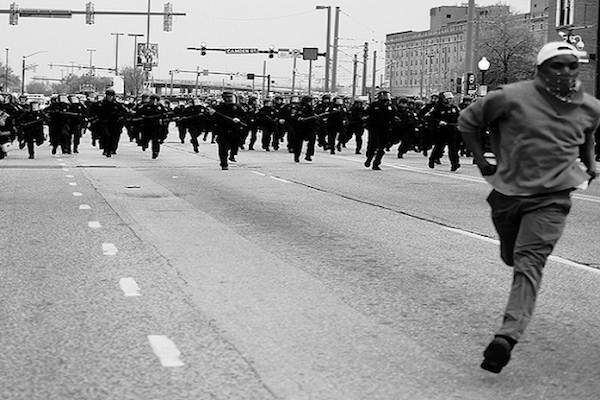 An amateur photographer with an ambition unparalleled, living in a city that is full of strife and tensions can make for some compelling art. Such is the story of Devin Allen, 26, who has quickly gained prominence for his photographs that have been shared by celebrities such as Rihanna, Beyoncé, Erykah Badu, SZA, and the world. Since becoming a viral sensation, Allen has had his images posted all across the Web, including one being featured as the cover for TIME Magazine.

Inspired by the likes of Gordon Parks and Andy Warhol, Allen, who picked up a camera in 2013, wanted to make sure that his work told the truth through all the saturation and lies told through mainstream media. “I know my city,” the West Baltimore-raised visual artist told TIME in an interview. “With all the frustration with the city, the mayor, the economy, the pot has been boiling. [As a black man] I understand the frustration, but at the same time, I am a photographer. I’m not going to lie to you. I’m going to tell you exactly what happened.”

With this goal in mind, a camera in his hand, and plenty of happenings going on—Allen snapped the shots that would tell the story of pain and frustration following the death of another killing by the police. Freddie Gray, a young man well known in the West Baltimore neighborhood, encountered the police in a situation that left the 25-year-old with a fatal spinal injury. Another black life lost in the wake of so many at the hands of the police. “When I first saw the news of what happened to [Freddie Gray], I knew I was going to cover it,” said Allen to TIME Magazine.

“I never thought it would get this big. My city kind of has a bad rap, but I thought if we can come together peacefully, it [would] be epic for this city, and it was my goal to capture that.” The city was still recovering from the events of April 1968, when Baltimore residents rose up to protest against the April 4 assassination of Dr. Martin Luther King Jr. in Memphis, Tennessee. The unrest spread across 125 U.S. cities, but in 2015, the protests following the death of Freddie Gray were initially peaceful. Allen, along with friends and family, were in the thick of it all as people took to the streets to chant, march, and fight for justice for Gray and his family. The most widely shared photo that Allen took, was of a man running away from a pack of charging policemen. “When I shot that,” he told TIME Magazine, “I thought it was a good picture, so I uploaded [from my camera] to my phone. By the time I’d done that, the police was all around me. I was in the middle of it.”

On the next page, read how Devin Allen witnessed the city of Baltimore descend and rebound from madness and turmoil…