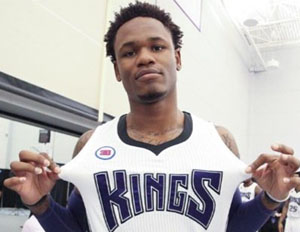 As the guard played at a Nov. 30 game against the Memphis Grizzlies, photojournalists noticed a message on his white-and-purple sneakers, “RIP MIKE BROWN,â€ was handwritten in all caps on his shoes. The St. Louis native told reporters he wanted to let people from his hometown know that he was thinking about them.

“I used to live about 15 minutes away,â€ McLemore told a reporter at The Sacramento Bee. “I moved my mom out, but my sister, she moved (to the Ferguson area), her and her kids, so I’m always getting information back on different stuff about Ferguson. It’s tough to hear and see the things going on out there.â€

The Kings loss against the Grizzlies at Sleep Train Arena in Sacramento. The final score was 97-85.