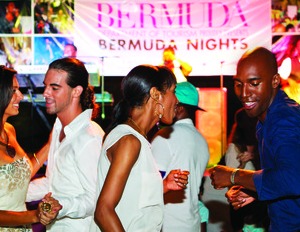 You can’t talk about vacation without mentioning food and you can find some of Bermuda’s signature dishes in a variety of restaurants. Head to one of the island’s most popular pubs, Swizzle Inn for a little bit of its British influence: the Back O Town sandwich aka fish and chips. Looking for a more elegant dining option? The menu at Tamarisk Restaurant and Terrace located on Cambridge Beaches Resort and Spa was full of refined dishes including the grilled jerk rock fish and fish chowder. Another Bermudian dish, which sounds a little odd but is very filling and tasty, is the curried mussel pie. Think of chicken pot pie – only with mussels, cauliflower and curry. And don’t leave the island without imbibing on the ubiquitous national drinks: the Dark and Stormy and Rum Swizzle (The Swizzle Inn is its birthplace).

For sports fans, there is the annual Cup Match Cricket Festival, which is a celebration across the entire island the first week of August. A cousin to baseball, cricket is played over the course of two days which are considered national holidays and celebrated with cruises, concerts and parties. Day one marks the emancipation of slaves in 1834 and the second, the colonization of the island by the British. The whole island is abuzz over the match andÂ  although a friendly rivalry amongst the fans, the fervor over which team one supported was clear. Make the mistake of wearing a light blue shirt with dark blue shorts and be prepared to hear it from the opposing Somerset team sporting the dark blue and red. Gambling, illegal for the other 362 days of the year, is offered at the event under tents cheekily referred to as the “Stock Exchange.”

Bermuda is what you’d expect from a beach vacation and then some. Whether you are looking for relaxation, culture or adventure, this is a place you should have on your vacation destination radar.