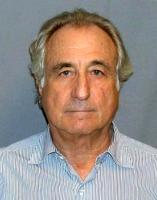 After hearing that Bernard Madoff received one of the highest-ever prison sentences for a white-collar crime, I cynically joked to friends that the judge must’ve mistaken Madoff for a black man. Madoff’s lawyers were hoping Judge Denny Chin of the U.S. District Court would consider their defendant’s age–he’s 71–and grant him just a 12-year stint. Instead, the judge had little sympathy for the depleted-looking, gray-haired man standing before him in the courtroom on June 29, and slapped Madoff with the 150-year maximum.

Naturally, this is no case of judicial bias. Dark humor aside, Madoff had it coming. Under the guise of being a caretaker of people’s money–nest eggs, inheritances, and entire financial futures–he pulled off what we’ve come to know as the largest fraud in history. Madoff’s investment firm is responsible for bilking clients of an estimated $13 billion. Though Madoff’s victims were largely mega-wealthy investors who traveled in rarefied social circles, they’ve engendered class-blind sympathy from the larger American public, who themselves have lost large amounts of wealth at the hands of financial calamity. In 2008, as the housing bubble fizzled and took the financial markets with it, Americans lost $11.1 trillion (or 18%) of their household wealth. Half of that falloff came in the final three months of the year, making it the steepest quarterly drop in all the 57 years that the Federal Reserve has kept such records.

Madoff’s sentencing has deeper meaning for the country. It puts final punctuation on the post-9/11 period in which secretive guardians of all-that-we-hold-dear thrived. In the aftermath of the dot-com bust earlier this decade, hordes of investors turned to hedge funds and other investment vehicles that promised outsized gains. Investors tolerated financial wizards who worked behind a curtain of unorthodox methods and arcane mathematical formulas. They believed their money managers were working magic. Besides, finance professionals told them, “it’s all much too complicated to explain.â€ Indeed, Madoff reportedly told investors that one stipulation of joining his special coterie of clients was that they never press him on how he plied his trade.

The phenomenon wasn’t only evident in the world of finance. In this now departed era of secrecy, Madoff was to money what Vice President Dick Cheney was to terrorism. Both argued that as sentinels of security (our lives, our money), they should not be questioned about their methods. Even though the former Vice President is on the media circuit making the case that torturing terror suspects and engaging in other more shrouded “intelligenceâ€ tactics kept us safe after the attacks of 9/11, the time for such empty justifications has passed. Americans want an explanation.

40 Best Companies For Diversity: Where the Jobs Are

FacebookTwitterYoutube
← Vibe Magazine Folds ← 40 Best Companies For Diversity: Where the Jobs Are
×