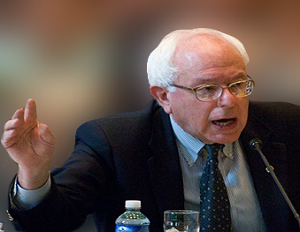 At a rally in Seattle on Saturday, Sen. Bernie Sanders announced that he was adding a new face to his presidential campaign.

Taking the stage to introduce the 73-year-old senator before a crowd of 12,000 people at the University of Washington, Symone Sanders made her first public appearance as the new national press secretary for Sanders’ campaign. Serving as the national youth chair of the Coalition on Juvenile Justice. Sanders, who is of no relation to the presidential contender, is a young, black criminal justice advocate and supporter of the Black Lives Matter movement.

In her 10-minute introduction speech, Sanders spoke openly about racial tensions and named the African American men and women who have recently died in the hands of police custody.

According to BuzzFeed, Sanders first connected with the senator about three weeks ago during an hour-long chat where she offered him advice on how to better understand the message behind the Black Lives Matter movement.

Neither Sanders nor the senator mentioned anything about the Black Lives Matter disruption at a campaign rally earlier in the day that forced the presidential hopeful to cut the event short. But with pressure on his back to address police reform, Symone Sanders says the campaign will release a detailed plan soon that will also give insight into “who Bernie Sanders is.”

“It’s not just about, I fought for civil rights and I protested and I sat at the lunch counters,” she said. “That is important and that is great, but that was 50 years ago. And he has a lot more to stand on than what he did 50 years ago.”