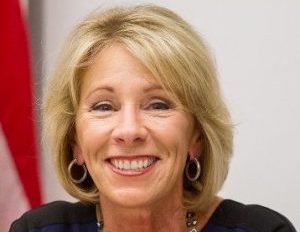 Rhames has been invited to meet with the Department of Education to talk about schools–which she did.

Rhames also spoke directly with the secretary by phone for a solid hour and says she found DeVos to be “humble, reflective, and probing.â€

Here’s an excerpt of Rhames’s account of that phone call.

A few weeks ago I wrote aÂ blogÂ expressing my exasperation with my children’s public school education and my attraction to school vouchers. To my surprise, United States Education Secretary Betsy DeVos spoke about that blog in aÂ speech, and her staff later invited me to the Department of Education to meet and talk about schools. It was an on-the-record discussion, andÂ I wrote about it too.

Then last Wednesday, I had an exclusive, eye-opening conversation with the secretary.

DeVos called me on my cell phone from a restricted line at precisely 10:00 a.m.

What surprised me was that DeVos seemed to call not to talk, but to listen. Our 30-minute call turned into an hour, and she didn’t seem to mind. She was gracious, granting me on-the-record permission to blog about our conversation even though I admitted that I hadn’t taken many notes or recorded the phone call.

Here’s a paraphrasing of part of our discussion:

DeVos:Â Do you think empowering parents to choose what schools to send their children to would change the dynamics of schooling?

DeVos:Â How would you fashion a way to ensure quality?

Rhames:Â That’s a real complex issue. Standardized testing cannot be the only way. Balance is key. Parent, teacher, and student surveys are telling, and those survey results should be published on every school for public consumption.

There should also be some basic accountability for schools that accept the vouchers and the parents who use them. For example, the U.S. Department of Education could say, “To accept a voucher, schools cannot have more than 25 children in one classroom.â€

And then some accountability for parents: “To use this voucher, you must attend at least two parent conferences per year, and your child must have at least 95% attendance.â€ We must balance school choice with some basic quality-control accountability–for schools and for parents.

DeVos:Â I can see the wisdom in your answer, Marilyn, but I visited a school in Texas that has 35-45 kids in a classroom with combined grades 1-6 and then 7-12. There are no teachers in the classroom. The kids decide what they want to learn and they teach themselves and hold each other accountable. It was really quite remarkable. I would be concerned that establishing blanket rules could hinder innovation.

Rhames:Â There is always the chance that accountability can stifle innovation, but when we consider the many millions of students that we have to serve, models like the one in Texas can go really bad if reproduced en masse without accountability.

A school voucher system is revolutionary–and I think public education is overdue for a revolution–but in most mainstream revolutions black people and poor people always seem to end up on the losing end. So it’s important that there are provisions to protect them in a free-market system, so those who just wish to profit off of poor children are weeded out. Otherwise, low-income parents will look around their communities and ask, “If I leave this school, where am I going to go? All my choices are bad.â€

I suggested that DeVos take her policy team through the design thinking process to fully explore and prototype what a viable, fair school voucher system could look like. I also suggested that she include a diverse group of parents, students, teachers, and community members from around the country to join in. The more input she gets from the public, the more well-received her new system would be.