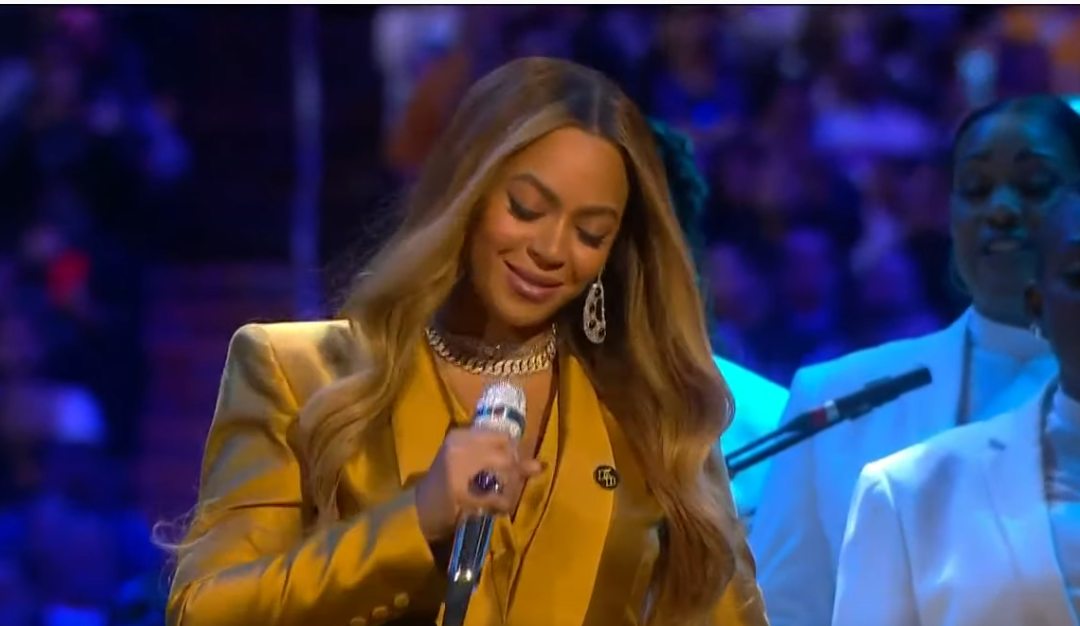 Bryant and his 13-year-old daughter, Gianna, died in a helicopter crash in Calabasas, a wealthy neighborhood in Southern California, on January 26. Bryant, an NBA legend, played 20 seasons with the Los Angeles Lakers. His home court, the Staples Center, was where he enjoyed some of his iconic moments.

The service started with interviews featuring Bryant during his illustrious career that moved into a beautiful performance by Beyoncé Knowles Carter, backed by a choir and violinists clad in white.

The “Formation” singer, dressed in a golden pantsuit, sang tearful renditions of her hit songs “‘Halo” and “XO,” drawing applause from Vanessa Bryant, Bryant’s widow and mother of his children. “I’m here because I love Kobe and this was one of his favorite songs so I want to start that over,” the superstar singer told the crowd, “but I want us to do it all together and I want you to sing it so loud that he hears your love.”

At the end of the moving performance, she blew a kiss and mouthed “I love you” to Vanessa Bryant before exiting the stage, leaving not a dry eye in a stadium. (“XO” was also one of the songs featured on the soundtrack of the 2015 documentary, Kobe Bryant’s Muse.) The service brought out over 20,000 to say their final goodbyes to the sports legend. Other celebrities at the memorial service included Jennifer Lopez, Magic Johnson, Kanye West, Alex Rodriguez, Alicia Keys, Shaquille O’ Neal, and Kim Kardashian.

Kobe and Vanessa Bryant spent New Year’s Eve with Beyoncé and Shawn “Jay-Z” Carter at a private, star-studded affair. “He was last in my house on New Year’s and he was just in the greatest space that I’ve seen him in,” Carter said in early February at Columbia University. “One of the last things he said to me was, ‘You gotta see Gianna play basketball.’ And that was one of the most hurtful things, because he was so proud.”

Kobe and Gianna were laid to rest earlier this month in a private service in California.