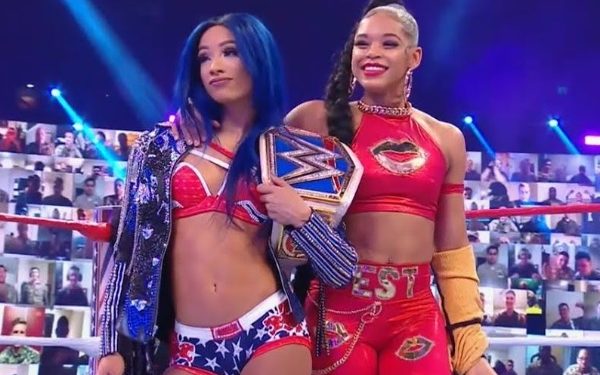 Professional wrestlers Bianca Belair and Sasha Banks are set to make history at WrestleMania 37 as they prepare to face off in the first title match starring two Black women.

Bianca Belair and Sasha Banks are set to battle it out for the SmackDown women’s title at WrestleMania on Saturday night, Tamba Bay Times reports. Her history-making feat comes one year after Bianca joined WWE’s main roster.

While speaking with the Times, Bianca shared her journey to professional wrestling after she grew up running track and competing in gymnastics. Born Bianca Blair Crawford, she drew inspiration from prominent Black female athletes like Florence Griffith Joyner, Gail Devers and Dominique Dawes. “I think about how my role models influenced me as a little girl,” the 31-year-old WWE star said. “I became an athlete because of them. And I’m not a professional track athlete or gymnast, but because I did those things, that led me to where I am now. So my life, my success was so greatly influenced by them. …

Belair gushed over how excited she is to be a part of WWE history. “I love the fact that this is not just something that’s just about me and it’s not just about making history. It’s about going out and representing for women and for Black women,” she explained. “It’s going to be amazing.”

Her success in the WWE is still a surprise after she got her start competing in track and CrossFit while in college. “My path to WWE was unique,” she recalled. “I didn’t know it was a dream until it became my reality. But I didn’t find wrestling. Wrestling found me.”

She transitioned into professional wrestling after her rib popped out of her sternum while CrossFit training. “I think the most difficult thing for me was I feel like I was playing catchup in trying to learn the history of the business and the art part of performing,” Belair explained. “I would say (the character Bianca Belair) is pretty much how I am, but just amped up to 1000.”

“I’m excited to get in the ring with her at WrestleMania, because I call myself the best, the B-E-S-T,” she added. ”… And we’re going to see (who will) come out on top that night.”