Biden, Bush, Obama And Others Pay Tribute To Colin Powell At His Funeral 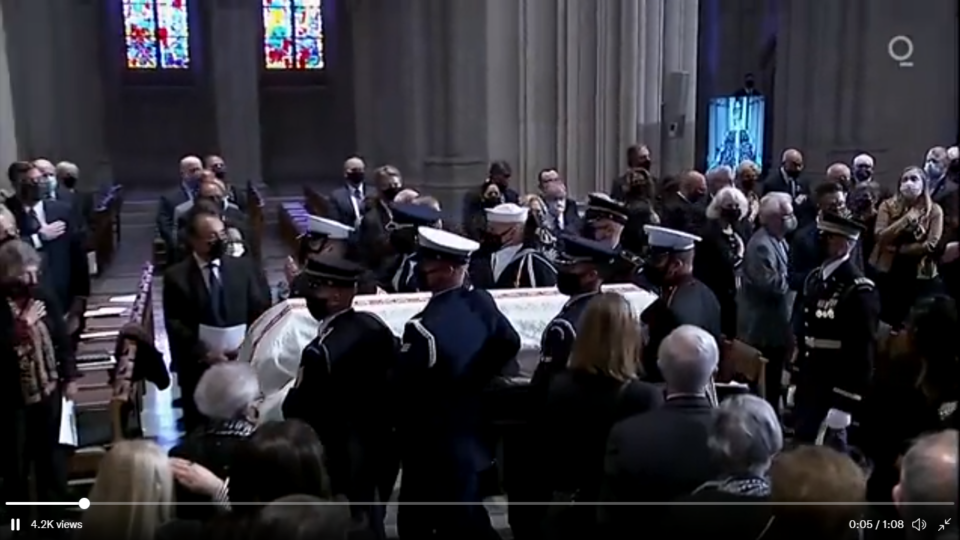 Hundreds of military personnel and politicians including former President Barack Obama gathered at the Washington National Cathedral to pay their respects to Gen. Colin Powell.

Powell passed late last month due to complications from COVID-19. The former Secretary of State was fully vaccinated, but his immune system was weakened by multiple myeloma, a blood cancer he was receiving treatment for.

“On policy, the general and I didn’t always reach the same conclusions,” Albright said according to Yahoo News. “And in fact he would later recount that one of my comments almost gave him an aneurysm. But over the past quarter century we also became very close friends.

“The reason is, that beneath that glossy exterior of warrior statesman was one of the gentlest and most decent people any of us will ever meet,” Albright added. “As I grew to know him, I came to view Colin Powell as a figure who almost transcended time, for his virtues were Homeric: honesty, dignity, loyalty and an unshakable commitment to his calling and word.”

Powell’s son Michael, spoke on his dad’s curiosity for life and his ability to connect with anyone.

“Colin Powell was a great leader because he was a great follower, he knew you could not ask your troops to do anything you were unwilling to do yourself,” Michael Powell said as his sisters and mother, Alma, looked on.

“His zest for life was derived by his endless passion for people. He was genuinely interested in everyone he met,” Michael Powell continued. “He loved a hot dog vendor, a bank teller, a janitor and a student as much as any world leader.”

Biden, Obama. Bush, their wives sat alongside Hillary Clinton in the front row of the cathedral. Former President Bill Clinton, who is recovering from an infection, did not attend. Neither did the Trumps.

Powell’s military career took him from combat duty during the Vietnam War to becoming the first Black national security adviser during the end of Ronald Reagan’s presidency. Powell later became the youngest and first Black American chairman of the Joint Chiefs of Staff under former President George H.W. Bush.

The general’s national popularity soared in the aftermath of the Gulf War, and for a time in the mid-90s, he was considered a leading contender to become the first Black President of the United States. But his reputation would be forever stained when, as George W. Bush’s first secretary of state, he pushed faulty intelligence before the United Nations to advocate for the Iraq War.