The Big Question for Trump's Tax Cut Plan: How Will the Tab Be Covered? 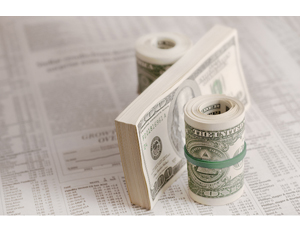 US cash as a percent sign - on a financial page.

If approved, President Trump’s tax cut plan could bear an eye-popping price tag. The one-page plan that promises reduced rates for large and small businesses as well individuals must get past Congress before it can be carried out.

The Committee for a Responsible Federal Budget says it applauds Trump’s focus on tax reform. However, it maintains that the plan has far more detail on how the administration would slash taxes and not enough information on how those cuts would be paid for. The Washington, D.C.-based, non-partisan group that tracks public policy on fiscal matters just issued a new report, which estimates the plan could cost roughly $5.5 trillion over a decade. The group claims that without adequate offsets, tax reform could drive up the federal debt, harming economic growth instead of boosting it.

“The President’s bold plan for enacting the first significant tax reform since 1986 will provide much-needed relief to the middle class, simplify our tax code, and stimulate American business. It will be paid for by a combination of economic growth and an increase in revenue created through the elimination of tax benefits and loopholes,â€ says White House spokeswoman Natalie Strom.

Strom adds thatÂ estimates of how much Trump’s tax cuts will cost are incomplete and, therefore, are inaccurate. “There will be many more fine details worked out with Congress on the plan, so putting a number on the cost before those are hammered out is premature,” she says.

The Effect on Businesses

A key part of Trump’s plan calls for dropping the corporate tax rate to 15% from the current maximum 39.6% rate company owners and investors pay on purported pass-through businesses. Those businesses can include mom-and-pop shops, law firms, hedge funds, and family owned businesses.

“Dropping the tax rates [that] small, pass-through businesses pay to 15% would be a significant cut for small businesses,” says Molly Day, a spokeswoman for the National Small Business Association. The Washington, D.C.-based business advocacy group has about 65,000 members, including many and black and minority-owned firms.

Day adds that the proposal would cut many deductions for those businesses, and could make filing taxes easier for them. Annual taxation surveys from the NSBA show that the biggest burden regarding federal taxes is complexity, not the burden of paying for them.

Depending on how the proposal shakes out, Day says that the proposed tax rate cuts could also allow small business to hire more workers, expand in size, make new investments, and buy more goods to sell.Â  “It could put some extra money in your pocket, and that’s a good thing,” Day says.

A Good Thing for Small Business?

Some observers contend that Trump’s plan could help small businesses land new deals or contracts from other businesses that, perhaps, might use the tax savings to hire them to do more work. Day agrees, saying the proposal could potentially cause an increase in business to business transactions. “It raises the tide for everybody,” she says.

But Day says the biggest hurdle for the Trump administration is moving the tax cuts through Congress, particularly when it comes to determining how they will be paid for. She notes that Trump’s proposal doesn’t include the border adjustment tax, a key interest funding interest supported by the House GOP leadership. Details are still unclear on how the administration’s proposal would pass, given budgetary rules in the Senate.

But the tax plan still raises questions, in regards to how it would be funded. Ron Busby, president of U.S. Black Chambers, Inc., says Trump’s tax proposal does not make clear how the tax cuts will be paid for. Â The Washington, D.C.-based USBC is a business advocacy group, with more than 116 viable black chamber affiliates and small business associations nationwide. It serves close to 250,000 small businesses.

“We can’t afford for the middle class and small business owners to carry the burden later down the line,” Busby says. “Small business owners and the black entrepreneurs that we serve want real reform that alleviates costly taxes. Tax reform is difficult. Hence, there is a reason [why] it hasn’t been done in 31 years.â€

Busby adds, “We urge President Trump to put forth a serious plan that gives relief to small business owners, achieves economic growth, and is paid for responsibly.â€

Jeffrey McKinney is a longtime freelance business writer and reporter that has contributed to Black Enterprise for several years on a broad range of business and financial topics.