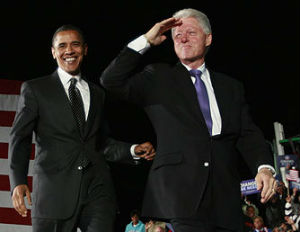 Former President Bill Clinton will deliver a major speech at this year’s Democratic National Convention, according to the Huffington Post.

Clinton was reportedly tapped by President Obama to deliver a speech making a case for Obama’s re-election and economic vision for the future.

The convention will be held in Charlotte, North Carolina.

Clinton will make the prime-time speech on September 5th, a day before Obama formally accepts the Democratic nomination.

“To us it’s about deploying our assets in the most effective way,” Obama campaign strategist David Axelrod said. “To have President Clinton on Wednesday night laying out the choice facing voters, and then having Vice President Biden speak right before the president in prime time on Thursday, giving a testimony to the decisions the president has made, the character of his leadership and the battle to rebuild the middle class that’s so central to our message.”