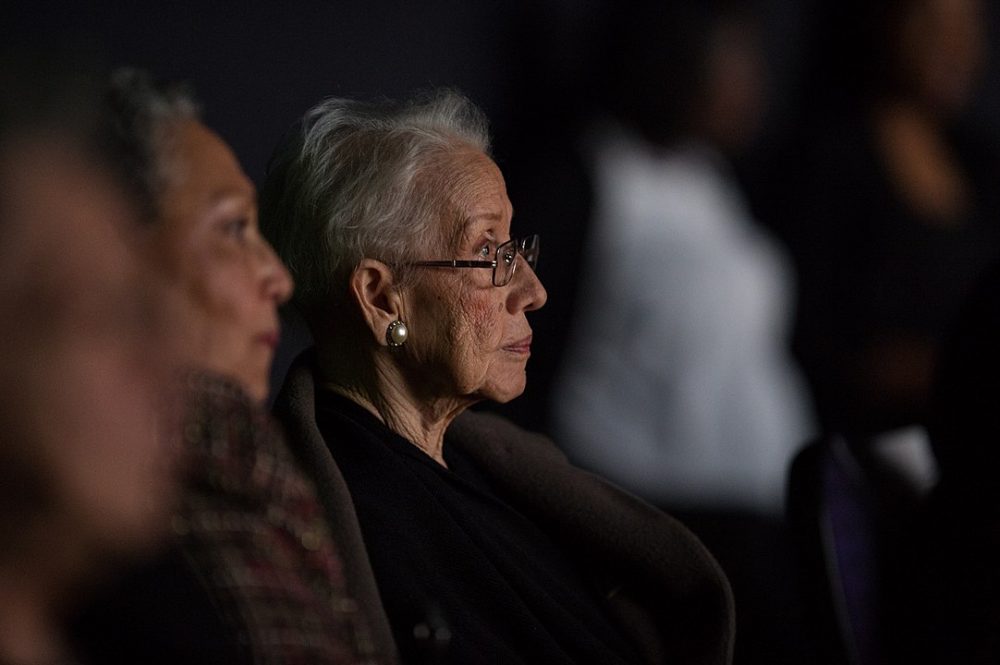 NASA "human computer" Katherine Johnson watches the premiere of "Hidden Figures" after a reception where she was honored along with other members of the segregated West Area Computers division of Langley Research Center, on Thursday, Dec. 1, 2016, at the Virginia Air and Space Center in Hampton, VA. "Hidden Figures" stars Taraji P. Henson as Katherine Johnson, the African American mathematician, physicist, and space scientist, who calculated flight trajectories for John Glenn's first orbital flight in 1962. Photo Credit: (NASA/Aubrey Gemignani)

A bipartisan bill that will award Congressional Gold Medals to NASA’s ‘Hidden Figures‘ has passed through Congress and is heading to the White House to be signed into law.

The lives and careers of Katherine Johnson, Dorothy Vaughan, Mary Jackson, and Christine Darden were featured in the book Hidden Figures: The American Dream and the Untold Story of the Black Women Mathematicians Who Helped Win the Space Race, by Margot Lee Shetterly. That book was adapted into the 2016 film Hidden Figures.

Hidden Figures tells the incredible untold story of Katherine Jonson, Dorothy Vaughan, and Mary Jackson.– the brilliant African-American women who worked at NASA and served as the brains behind the launch into orbit of astronaut John Glenn, a stunning achievement that turned around the Space Race. The visionary trio crossed all gender and racial line and inspired generations.

“Katherine Johnson, Dorothy Vaughan, Mary Jackson, and Dr. Christine Darden made monumental contributions to science and our nation,” said Senator Harris in a statement. “The groundbreaking accomplishments of these four women, and all of the women who contributed to the success of NASA helped us win the space race but remained in the dark far too long. I am proud our bill to honor these remarkable women has passed Congress. These pioneers remain a beacon for Black women across the country, both young and old.”

Our hat is off to the Hidden Figures as they continue to make history.