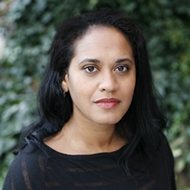 Public opinion has taken a dramatic turn when it comes to marijuana prohibition. Fifty-five percent of Americans now believe that marijuana should be legally taxed and regulated. Much of this change was propelled by outrage over racism in drug law enforcement and wasteful spending associated with marijuana arrests. With marijuana legalization gaining momentum, it’s time now to ask: will there be an opportunity for black entrepreneurs to take a place at the table in the burgeoning new legal marijuana industry?

Decades of statistics show that black Americans are disproportionately targeted for drug law violations. Drug use and sales happen consistently at around the same rate across racial lines. African-Americans make up 13% of the country’s population – yet, 31% of those arrested and more than 40% of people incarcerated for drug offenses are black.

A black person is four times more likely than a white person to be arrested for marijuana possession in the U.S. The consequences of a marijuana arrest can be severe and often lead to loss of employment, child custody, business loans, professional and driver’s licenses, student aid, public housing, and other social assistance.

Religious leaders and prominent civil rights organizers have come together to call for ending marijuana prohibition. Even President Obama has said recently that he’s troubled by racial disparities in the application of marijuana laws.

In 2012, voters in Washington state and Colorado made their states the first to legally regulate the production, distribution and sale of marijuana. And last year the Latin American nation of Uruguay became the first country to do so. Although marijuana is still illegal on the federal level, the Obama administration has taken a decisive position not to interfere with the will of states on this issue and has promised to enable banking institutions to accommodate the new industry without fear of legal risks.

Big investors are poised to cash in on marijuana’s swift shift from contraband to commodity. Former Microsoft executive Jamen Shively, who some are now calling the “Bill Gates of Cannabis,” has gone public with a biotech company with plans to get a corner on the marijuana market. Everyone from Silicon Valley to Main Street is looking to cash in. The marijuana industry in Colorado alone is already estimated at $600 million, which is more than enough to whet appetites.

What does this all mean for advocacy groups like the Drug Policy Alliance who got involved in ending marijuana prohibition out of concern for human rights and social justice?

Michelle Alexander, author of the seminal book The New Jim Crow, made this provocative assertion on a recent press call: “After 40 years of impoverished black men getting prison time for selling weed, white men are planning to get rich doing the same things. So that’s why I think we have to start talking about reparations for the war on drugs. How do we repair the harms caused?â€

Whether or not the community gets formal compensation for damage caused by mass incarceration and the drug war, there is certainly a valid and much needed conversation to be had by advocacy groups, activists and entrepreneurs about reducing barriers to business opportunities for African Americans in this new market as it rapidly forges a path to the mainstream.

Sharda Sekaran is the managing director of communications for the Drug Policy Alliance (DPA), which is the nation’s leading organization promoting drug policies that are grounded in science, compassion, health and human rights. 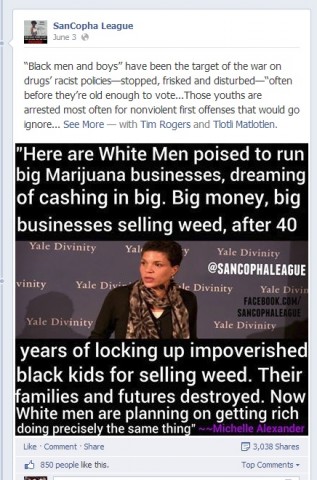