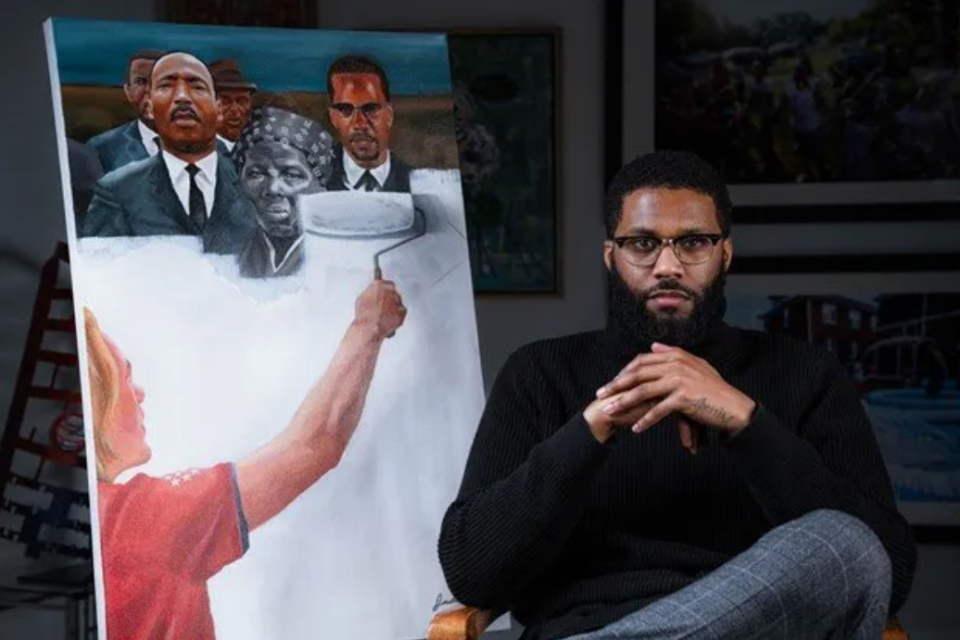 The self-taught painter and curator wanted to reflect on how divided the country is over concepts surrounding CRT being taught in schools. Since its first showing at the Irwin House Gallery in Detroit, the painting has gone viral. The exhibit is titled TRIPTYCH: Stronger Together.

Only 250 personally signed prints were available for purchase.

While the painting doesn’t include a flag specifically, the white person is wearing a red shirt with hints of blue and several small white stars on its sleeve in a possible nod toward an American flag.

The painting serves as a more visually pleasing depiction of the white-washing of Black history. Since going live, the image has gone viral and caused widespread conversation around the issues of race and social justice represented in the artwork.

“It has made me feel good in a way that people are taking the time to assess my art,” Harris told Blac Media. “Thoughts of people who have not agreed are important too, because I want to be able to understand why people think in their way.”

Debates around CRT have come to the forefront in recent years following Nikole Hannah-Jones’s New York Times piece “The 1619 Project”. The far-right has raised opposition to notions of CRT due to it wanting to highlight more of America’s history of racism and social injustice when teaching the country’s history.

Many conservative states have voiced their opposition to implementing CRT in their schools, with former President Donald Trump even going as far as threatening to withhold federal funding from states who added forms of CRT into their curriculum.

“Eventually, we will get here,” Harris said.

“Erasing Malcolm X, MLK, Harriet Tubman and all of our changemakers. It’s a dialogue. It’s a think piece and now I guess, it’s a talk piece because people are definitely talking.”

The limited-edition artwork sold for $100 and has already sold out online.