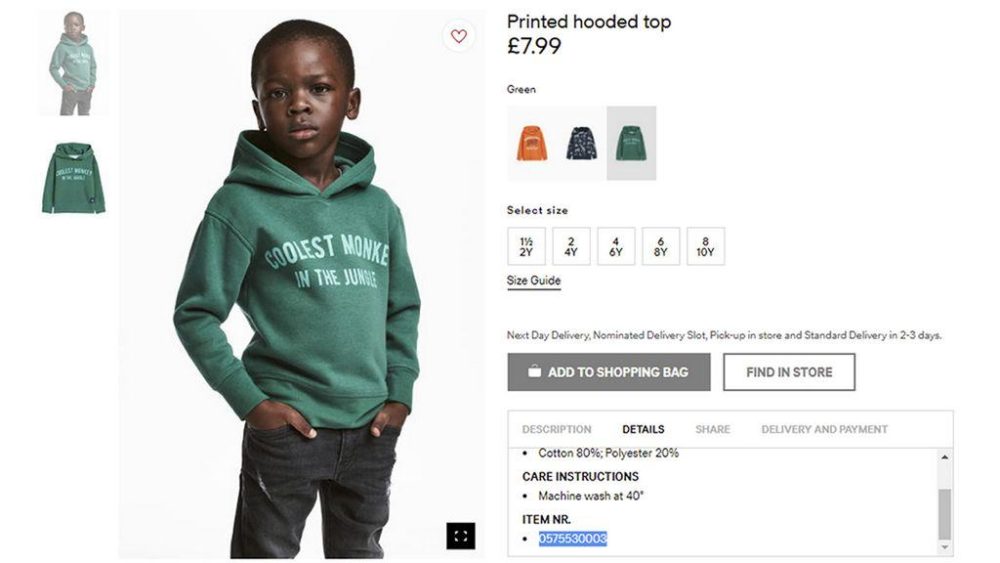 Amid the public backlash against H&M, a black artist and entrepreneur has transformed a racially offensive ad found on the retailer’s website into a message of empowerment.

H&M has been swamped in a firestorm of scrutiny since it released an ad featuring a black child modeling a green hooded sweatshirt emblazoned with the phrase “coolest monkey in the jungle.” Social media users vowed to stop shopping at the retail giant while others blasted marketing executives for approving the image despite the ugly history of using “monkey” as an ethnic slur against black people.

A number of celebrities, including Questlove and Queer Eye for the Straight Guy host Karamo Brown, also criticized the ad, while Grammy Award-winning singer Abel “The Weeknd” Tesfaye took his outrage a step further by ending his partnership with the company. The Canadian singer starred in and curated H&M’s Spring Icons Selected by The Weeknd campaign early last year and created an 18-piece collection for the brand in the fall.

In response, H&M issued an apology and removed the ad from its website. “We sincerely apologize for offending people with this image of a printed hooded top,” H&M said in a statement. “The image has been removed from all online channels and the product will not be for sale in the United States. We believe in diversity and inclusion in all that we do and will be reviewing all our internal policies accordingly to avoid any future issues.”

The hoodie, however, is still on sale in the U.K.

Insulted by the ad, Chris Classic, a songwriter, recording artist, and BE Modern Man, recreated the image with a hand-drawn crown covering the words on the hoodie and the model’s head “to symbolize being self-made,” he told Black Enterprise. He also wrote the word “shame” on the image using the H&M logo. “As a father, I was appalled. I’m aware of how finite the internet can be. I didn’t want that young man to get older and see his photo used to highlight racism without also seeing a different version of himself, who he really is.”

Classic also took a shot at Swedish business magnate Carl Stefan Erling Persson, the chairman and heir to the H&M empire, which was founded by his father, Erling Persson, in the 1940s. “I’m almost certain the Persson Family and their $31 Billion wont care in Sweden but… this lil guy will see his pics and the mockery one day because the internet doesn’t erase… so I just hope he gets to see this one or any like it that celebrate him,” Classic wrote on an Instagram post.

Classic’s remix has since been shared by Lebron James and actress Niecy Nash.

“Do you understand that PREDATOR has a negative connotation particularly when we are talking about the perception of Black people in the world? This is irresponsible,” wrote Rye on Instagram on Monday.