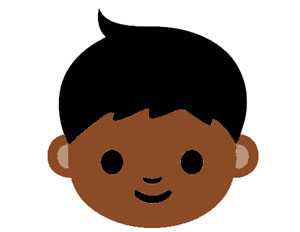 The joint proposal from Apple and Google would allow for various skin tones on emoji faces. (Image Credit: Unicode Consortium)

Apple and Google are working to make the dream of a diverse cast of emoji characters a reality.

The Unicode Consortium, the organization responsible for making sure different languages and characters (including emoji characters) are readable on multiple platforms, has released a proposed draft for Unicode 8.0, the next iteration of the Unicode standard.

The draft, written by Unicode co-founder Mark Davis and Apple’s Peter Edberg, allows for emoji characters that use a skin tone (like faces and hands) to utilize a color selector ranging from light to dark tones.

The report highlights the current state of diversity in emoji, which is to say, little to none. “The Unicode emoji characters for people and body parts are meant to be generic,” reads the proposal. “Yet following the precedents set by the original Japanese carrier images, they are often shown with a light skin tone instead of a a more generic (inhuman) appearance, such as a yellow/orange color or a silhouette.”

Apple has come out in support of a more diverse set of emoji characters in the past, so it’s no surprise that its associated with a draft to inject some color into the homogenous pool of faces. “There needs to be more diversity in the emoji character set, and we have been working closely with the Unicode Consortium in an effort to update the standard,” said Apple’s VP of worldwide corporate communications Katie Cotton, to MTV. The company is also a member of the Unicode Consortium, the organization responsible for developing the Unicode standard.

It’s still a proposed draft, which means anything can change. But the fact that consumer demand has spurred this development is certainly a step in the right direction.