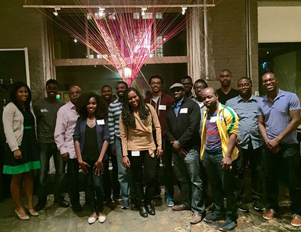 This article was originally published on USAToday.com on Oct. 7, 2015.

Makinde Adeagbo knows how isolating it can be to live and work in Silicon Valley as an African American. He says it’s even more isolating to be a software engineer here.

Adeagbo, who is an engineer at the San Francisco company Pinterest, says he can go weeks without spotting another black engineer in America’s tech hub.

Over the summer Adeagbo founded /dev/color, a nonprofit group for African American engineers that officially launched on Wednesday. The group brings together engineers from top companies such as Facebook, Uber and Airbnb to provide support and a voice to African Americans and give them the opportunity to raise up the next generation, Adeagbo says.

Adeagbo says he hit on the idea while volunteering as a mentor to a couple of computer science students.

“These students knew they had someone who had their backs, whom they could look up to and reach out to when they needed help. I thought to myself: Every black software engineer could accomplish a lot if they had someone like this,” says Adeagbo.

The name /dev/color is a reference to a common directory on computer systems “as well as our efforts to strengthen the community of Black software engineers, engineers of color,” he says.

Adeagbo’s /dev/color is joining Black Girls Code, Code 2040, and the Hidden Genius Project, a new and growing wave of enterprising organizations founded by African Americans aimed at addressing the scarcity of African Americans in the tech industry.

“Other black software engineers need to provide this for the black engineers coming behind them,” says Adeagbo, who is splitting his time between /dev/color and Pinterest. “We all need to work together to pull ourselves up and make sure we are accomplishing all that we can.â€

Read the rest at USAToday.com.