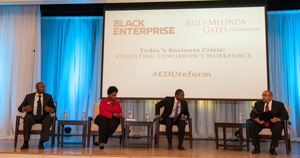 In the first session of the BLACK ENTERPRISE/Bill & Melinda Gates Foundation Memphis-based symposium, we explored the range of challenges that face America’s school systems and the roles administrators, educators, community members and business leaders must play in improving the K-12 experience for students in urban institutions – most of whom are African American and Latino. The following excerpts from BE Editorial Director Alan Hughes’ probing conversation with panelists Irvin Scott, Gates Foundation Deputy Director of Education; Kenya Bradshaw, Executive Director of Stand for Children, Memphis, an education advocacy group; and Afernee “Pennyâ€ Hardaway, retired NBA legend and co-owner of the Memphis Grizzlies franchise reveals the depth of the problem and the reason why urgent action is required.

American students ranked 25th in math and 21st in science out of the 30 largest industrialized nations. There’s an estimated $192 billion in lost income and taxes due to children dropping out all year. These are ugly statistics as you look at the fact that by 2040, most of this nation will be black or brown.

How will each of you try to move the needle and improve things in our public schools?

Irvin Scott: I have the privilege to oversee the empowering effective teachers work at the Bill and Melinda Gates Foundation. The work that I do is trying to ensure that more students across the country can [be positively impacted by] many teachers that they have in their K-12 experience.

Kenya Bradshaw: When we hear that we have a 71% graduation rate, we’re really excited and I commend the leadership of the district about that but what that means is 30% of our children didn’t graduate. So if we woke up every day and had 30% of our community being shot then we would be marching in the street. We don’t have that happening around the crisis of education. So our work with Stand for Children is really two-fold: How do we build up a community that’s going to begin to advocate for something different and then secondly, how do we address the leadership gap we have in place.

Penny Hardaway: I’m in the process of putting a $21 million project together for an education/basketball facility on the east side of town. We’re just like anyone else, we’re looking for funds. Being a retired player, I just wanted to really come back home and make an imprint on the community because I made it and I thank God for allowing me not to forget where I came from and understanding that I was these kids that I’m teaching and coaching right now.

What role can the business community or the community at large play in helping the schools?

Hardaway: I think it does go deep enough to have to go back to the households. Being in coaching, you wear a lot of hats for the kids. What I found out, instead of judging the kids, I had to find out what was going on deeper with them before I really went deeper as far as coaching. [Some] of their households were a mess, and the kid isn’t really a priority in the neighborhoods.

Kenya: Many of our kids don’t end up coming to school until after Labor Day. And so, that directly impacts how much money we have to spend on schools each year. And so, we have to begin to encourage our community that education is a priority. I’ve never met a parent who didn’t want better for their children. I’ve been doing organizing all my life. I meet people who haven’t had the opportunity or aren’t equipped with the skills necessary to best support their children. We try to help educate them and equip them with those tools.

Scott: I want to go back to your original question around what the business community can do. I think there are two understandings that are absolutely critical for the business community, particularly located in Memphis and in any school system where you have African-American and low-income minority students. The first understanding is that the students going to those schools, K-12 will one day be your employees. They will one day come to your place of employment and ask for a job. All of those skills that you would want employees to have when they come to your place of employment, you should be concerned that they’re actually getting them at the K-12 experience. The second understanding is [learning] what’s going on in Memphis [school system]. Bill and Melinda Gates have put their hard-earned dollars behind around measuring the effectiveness of teachers. Employees and business communities that are located in Memphis should understand that initiative. It’s about making sure that every student has a great teacher. It’s about being able to recruit the best teachers. It’s about being able to measure the effectiveness of those teachers. Â It’s about being able to recognize and compensate those teachers, because the research has shown us, that if a student has an effective teacher over a period of time, that student will learn more.

It’s not just about having a great teacher. Shouldn’t students have the right curriculum?

Scott: If you’re going to improve the learning of the student, you have to impact three basic things. One is the teacher. You have to insure that the teacher is strong. Â The second is the content, making sure the curriculum is rigorous, challenging. and something the student is motivated to learn. And third is the engagement of those students. So, you’re exactly right. It’s not just about teaching. We have a major focus on teaching here in Memphis, but at the Foundation, we’re also very interested in the Common Core State Standard, which ensures that every child in this country, particularly in urban communities, is being held to a high standard when it comes to curriculum.

Bradshaw: It’s important for us to begin to make shifts in what we’re talking to our students about. Our students are going to be the employers in our community but they’re also going to be our elected officials so how do we begin to make sure that they are equipped with the skills necessary to be critical thinkers. What business leaders can do [is] begin to shift the conversation. We have to think differently about how education should be provided to our children and then begin to act. Another piece is teacher compensation. From a business perspective, when that conversation comes up you cannot be absent, sit back and be silent. You have to be participating in advocating for our teachers being paid the wages that we want them to have.

Penny, do you see NFL players, NBA players, celebrities, having a role in this?

Penny: I would love to see all athletes get involved, because the kids look up to us. I agree that we need to compensate teachers in a way that’s more respectable because right now it’s not. Â But if athletes get involved, it’s just like the presidency, he got the entertainers involved, he got us athletes involved and the people that are fans are ours were the ones that really brought more people to the table.

Generations ago, you go to school, get your high school diploma, get a job and stay there until you retire, but that’s no longer the case. But schools are still teaching in the same manner. Â Why haven’t schools evolved?

Scott: We haven’t figured out how to infuse that technology or use that as a platform for connecting with kids. Actually, if I could just put in a plug real quick for the Foundation, That is something we’re very, very interested in. We have a whole team, our next generation models team, which is very interested in figuring out how to develop games that will allow curriculum to be delivered to kids in a more engaging way. How do we do assessment through the use of technology? It’s an exploding industry. So, those of you who are in business or entrepreneurial, keep that in mind, an exploding industry is getting ready to happen around education and the technology and the two coming together.

How do you gain more funding from state and federal government?

Scott: Money is an issue. Â That is even more so the case over the past several years during the recession. And I’m not sure if it’s not going to be an issue in the near future. At the Gates Foundation, we try to be very thoughtful and strategic about how to make investments in a way that helps districts move the work in an innovative way — especially during resources challenges. You have to think creatively about it. How do you get more in terms of the philanthropic community? The philanthropic community here in Memphis has been phenomenal.

Kenya Bradshaw: We ran a campaign to ask for a half-cent sales tax increase, and our community overwhelmingly voted against it. For me it was personal. It wasn’t just a campaign. We were really trying to get our community to see that we could service every child who needed early childhood education in our community with [those] dollars. We are underfunding our schools on every level, from the federal level to the state level to the local level. We need to start calling people out because we don’t tell people who send their children to St. Mary’s and spend $20,000 a year, that their throwing money into a black hole but when we talk about putting a half million into a program in Memphis people say we shouldn’t be giving it to those children.

We only have two vehicles either a sales tax or a property tax. Now, you just passed up on sales tax, so now we’re more than likely going to have a property tax that is not going to be enough for us to build a world-class education system that we know that we need for our children. So, what are you going to do? And so, this is the call to action for you as community leaders. Step up and do something for our kids. Stop sitting back and being silent about what should happen to our children.

Hardaway: I think we need to [have more conversations like] this but in our neighborhoods. Take it to the community, community centers, and churches or wherever — just so they can have a voice and we can have a voice.

Scott: One of my favorite quotes is “People don’t think their way into a new way of acting. They act their way into a new way of thinking.â€ So, you can spend a lot of time trying to get people to think differently and hope that they will act differently or you can give them opportunities to act differently. Over time, they get different results they will begin to think differently. So, you say what does that mean? It means you’ve got a lot of work happening already. The work that we’re investing in, particularly here in Memphis, I think people should make sure they understand and figure out how to get more involved with. If you have a school in your community, how can you engage in that particular school around issues with that school? Act on that.

What message do we have to share with students?

Scott: Our kids who go to the schools here in Memphis are not just competing against the kids in Knoxville or Atlanta. They are competing against kids who live in Dubai, who live in other countries. As I used to say to my students, another person can take your job, the same job that you’re applying for and never even step foot in this country. That’s the way technology is. You get jobs online. You can do your work online. The economic viability of this country is tied to the kids who go to these schools. So, whether you have a kid in the school system or not, your taxes will be impacted on whether these kids are actually learning.