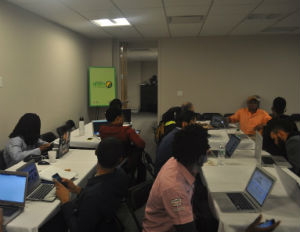 This Saturday, over 25 hackers and coders showed up at Black Enterprise headquarters to show off their skills in Black Enterprise’s Driving Innovation Hackathon presented by Toyota.

From the moment the hackers arrived, they began discussing ideas and working on the initial frameworks for their programs. The more outgoing programmers recruited their teams with a demo of a previous app they designed.

Three programmers were peppered with questions when they pulled out their Google Glass wearable devices, offering to show how it works and how it could be used in the event.

Community builders from Google were also in attendance, talking to programmers about the kind of programming languages they were planning on using in their apps.

One developer brought out his Android gaming console, the Ouya, for displaying his application on a TV.

When asked why they were participating in the hackathon, we got a variety of answers, ranging from community building to showing off their skills. “This is my second hackathon, and I wanted to join up with someone with a good idea and make it work,” one hacker said.

Over the next 24 hours, hackers will compete in teams to build an app dedicated to environmentalism and technology, essential to Toyota’s Green Initiative.

Keep checking in to the Black Enterprise Driving Innovation Livestream for more news, interviews, and check-ins on the coders.