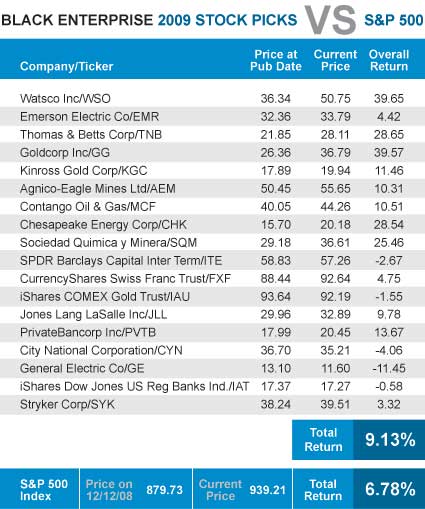 I’m happy to report that investors who’ve heeded the advise of Black Enterprise‘s stock-picking experts for the first half of 2009 are experiencing higher gains than they would have if they’d invested in a fund that tracks the S&P 500 Index. In 2009’s first six issues of Black Enterprise magazine (which appeared in subscriber’s mailboxes between Dec. 12, 2008 and May 22, 2009), six financial experts touted 18 stocks (three each) as part of the magazine’s Â “Stock Picksâ€ feature. The entire group of stocks posted a total return of 9.13% through mid-July (measuring from the time of publication for each pick), compared with the S&P 500’s gain of 6.78% over the same period.

Of the experts who participated in Stock Picks ending with the June issue, Morningstar analyst Daniel Holland (featured in January) selected the best-performing basket of stocks, suggesting that readers look at industrial companies Watsco Inc., Emerson Electric, and Thomas & Betts. Those companies’ shares jumped a collective 24.24% through mid-July.

It’s no easy feat choosing winners in this environment, as I’m sure Ted Parrish, principal and director of investments at The Henssler Financial Group, can attest. For our June 2009 issue, Parrish picked three stocks (General Electric, iShares Dow Jones, and Stryker Corp.) that have, thus far, been the worst-performing group-of-three. They were down a total of 2.9% by mid-July. It’s important to remember, however, that BE‘s Stock Picks are meant to be relatively long-term investment plays. So, keep watching.