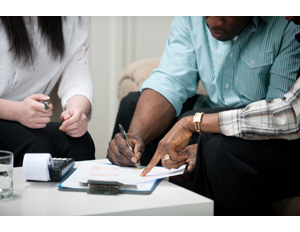 An African American couple meet with a financial planner in their home. .

The Institute for College Access and Success last week released an analysis of college costs examined as a percentage of household income. Although most Americans decry the high cost of college, for low-income families meeting those costs is simply not possible. As you might expect, black families and other households of color bear a cost load inversely proportionate to their income.

TICAS defines net price as the total cost of attending college, which along with tuition and fees includes books, transportation, and living expenses.

What about financial aid, you ask? The TICAS analysis subtracts all of it–state and federal aid, and college grants and scholarships. In other words, even with aid, low-income students and their families obligate a much higher percentage of their income to attend college, compared with other income groups.

But here’s the statistic that really leaped out at me: “…the majority of African American, Latino, and Native American college students have family incomes under $30,000….â€ So students of color are disproportionately burdened–which also leads to higher student loan indebtedness or more working hours; though studies have shown that working more than 20 hours a week reduces the likelihood that a student will graduate.

“College prices alone don’t tell you whether they’re affordable for a given family,â€ Debbie Cochrane, vice president of TICAS and a co-author of the report, said in a statement. “The net price of college may be lowest for the lowest income families, but a family living on $30,000 per year cannot realistically devote more than half of its income to college and still cover basic necessities.â€

None of the states meet the Lumina Foundation’s affordability benchmark known as the Rule of 10, in which the net price of college doesn’t exceed the equivalent of 10 hours of work a week, earning minimum wage (about $3,625 annually).

“We will not achieve equity in college enrollment and completion until federal and state student aid recognize the full cost of attending college and direct more aid to those with the greatest need,â€ said Lindsay Ahlman, senior policy analyst at TICAS and a co-author of the report.