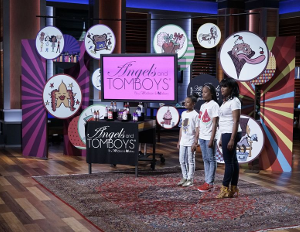 Earlier this month, Memphis-based Angels and TomboysÂ® secured a deal with Sharks, Daymond John and Mark Cuban. Later this month, Philadelphia-based LuLu Bang will pitch their business to the Sharks.

On episode four of Season 8, Mallory, Madison, and their mom Viera pitched Angels and Tomboys to The Sharks. The initial ask was $55K for 20% of the company, marketed toward girls ages five to 12.

After sharing their story and motto, “All girls are created equally different,â€ with $58,000 in revenue to date, Mark Cuban and Daymond John invested $60,000 for 33% of the company. 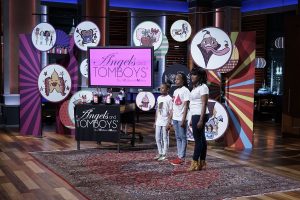 On October 28, Ashley, Kelly, and Jorrae Beard will pitch LuLu Bang to the Sharks. The Beard family has run Joyce’s Soulful Cuisine, a family owned and operated catering service and food manufacturing company, for several years.

Over the years, the family has developed a line of special sauces to serve while catering events. In response to the popular demand, the family began manufacturing and bottling the sauces. The sauce line is named after Michael Anthony “Lulu Bangâ€ Beard, and the recipes are inspired by family matriarch, Joyce Beard. 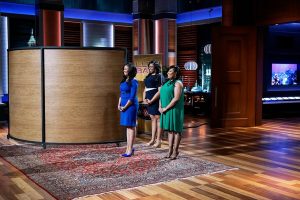 Black women are most the entrepreneurial segment of the U.S. population. An American Express OpenÂ report found that the number of businesses owned by African American women has grown 322% since 1997. During this same time period, the rate of entrepreneurship in America has also continued to steadily decline since the late 1970s.

As the growth, acquisition, and/or closure of older and larger businesses leads to consolidation, new businesses must be started, to ensure that capital continues to flow freely throughout the U.S. economy. When a new business is formed, it frees the capital to purchase goods and services, pay employee salaries, and make business expenditures. Black women are a catalyst for the dynamic economic impact entrepreneurship brings to U.S. and global economy.

The full potential of black female founders has yet to realized. Black women are, perhaps, the fastest growing group of entrepreneurs in America.

The U.S. economy is continuing the long recovery from the Great Recession. The founding and growth of new businesses is critical to recovery. However, despite this need, access to capital and business resources remains a problem for black female founders.

Black women have always done what they needed to do to support themselves, their families, and their communities. The need to survive and thrive has often led to entrepreneurship. We now have data to support this incredible legacy.

The businesses are there; the resources should be, too.

Values Partnerships organizes a nationwide casting tour for ABC’s Shark Tank. We provide pitch prep, access to capital discussions, and businesses resources, from the Minority Business Development Agency (MBDA) and other organizations, to entrepreneurs at our casting calls, but more is needed.

Check out this list of 31 Brilliant Black Businesswomen to support this month, and catch Season 8 of Shark Tank, Fridays at 9/8c on ABC. 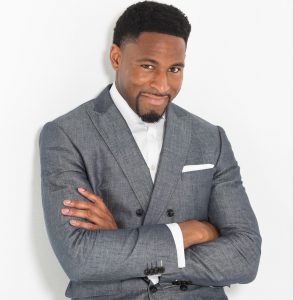 Brandon Andrews is a senior consultant at Values Partnerships. View his commentary on business and politics at www.brandonandrews.me