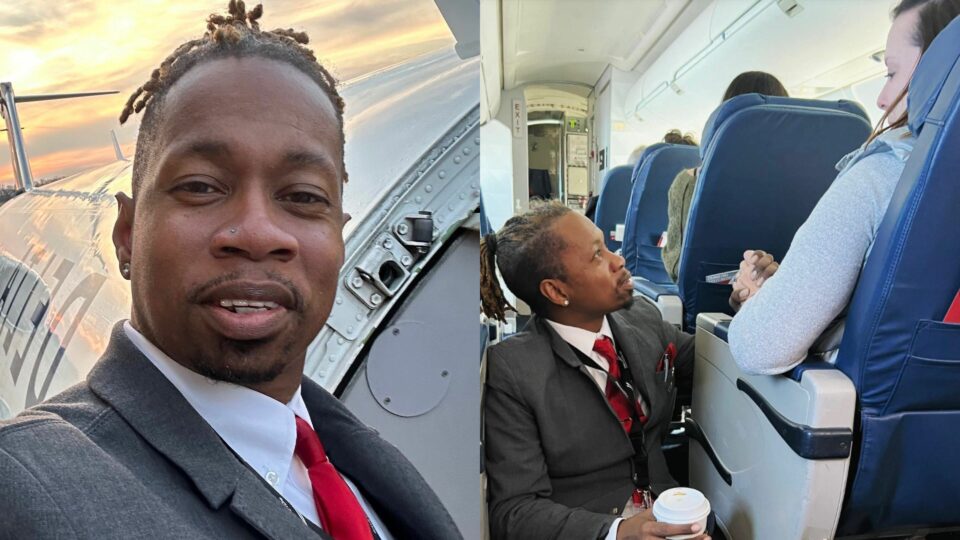 Delta flight attendant Floyd Dean-Shannon‘s comforting gesture toward a woman passenger has given people hope that kindness still exists in the world.

The event, which Molly Simonson Lee captured in a viral Facebook photo, occurred almost two weeks ago when the plane was set to depart from Charlotte to New York. During the trip, Dean-Shannon made it a priority to tend to the visibly emotional passenger who expressed they were nervous about the flight because they hadn’t flown in quite some time.

Following the unidentified woman’s concerns, while squatting in the middle of the aisle and holding that passenger’s hand, Dean-Shannon described to the woman the airplane’s sounds and movements as it happened to relieve their fears.

On January 23, in an interview with WBTV, Lee recounted the entire ordeal and expressed why she wanted the world to know about Dean-Shannon. “As soon as I boarded, it was clear that this guy (Dean-Shannon) was exceptional,” Lee said.

Later, Lee also revealed that before carrying on with his other responsibilities, Dean-Shannon made it his mission to make sure that the woman was okay, even if it meant sparing an extra five to 10 minutes. The flight attendant’s plan worked because the passenger was able to get through the entire trip soon after Dean-Shannon’s gesture.

Lee told the news outlet that she shared the entire experience online while also demanding a raise for Dean-Shannon by starting a GoFundMe page because she was in awe of his empathy, given his busy schedule.

“I was just so struck by his generosity.” Lee explained.

“Flight attendants are so busy and he doesn’t have an extra second so he probably had to work extra hard to put aside for that moment but he wasn’t worried about that. He was worried about making sure she was okay. It was beautiful to me. I had tears in my eyes watching. It was so kind.”

Since Lee’s Facebook post, the photo has been shared over 11,000 times and circulated on other social media platforms. As for the GoFundMe Lee created for Dean-Shannon, it has raised over $1,000 at the time of posting.