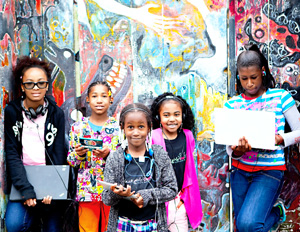 The classes are underwritten by different companies on an event-by-event basis. In 2012, BGC was the Google Rise Recipient Award Winner and received a $25,000 grant, which helped the program grow. She’s also received smaller grants of less than $5,000 from Pivotal Labs and Semantics. Universities like Georgia Tech have also been essential to her success.

In addition, Bryant received support from companies like Chicago-based Thoughtworks, a global software consultancy that provided BGC with space and software engineers who teach the classes. Bryant also raised $21,000 on Indiegogo to pay for the 2012 summer program “Summer of Codeâ€ where girls were taught HTML, CSS, and were able to walk away with the ability to create their own web pages.

This weekend, the organization is hosting two landmark events. On March 9, 2013, the organization is holding a national video game challenge simultaneously in San Francisco, Atlanta, and Chicago. And, at SXSW Interactive, BGC,Â MoJo Media Works and Blacks in TechÂ are presenting a Weekend iPod Film School and Web Design Workshop for Girls.

Here, Bryant outlines what parents and educators need to do to encourage and support girls interested in technology-based fields of study:

Parent engagement and knowledge is key. This year Black Girls Code began building parent workshops as a sub-component of the student workshops. “Giving parents tools and information about the field of technology and how to support their student in their studies is really important to keep girls and boys engaged in the field,â€ says Bryant.

Provide girls with peer mentors, as well as industry mentors. “The [problem] circles back to exposure and access. There are just not a lot of women in the field right now. Girls don’t see themselves reflected. They rule it out before they start down the path of discovery. That’s a problem. We need to encourage girls to go into the field. But the women that are there now also need to step out as mentors to really support the next generation.”

Look for in-school and afterschool programs that teach technology. “Most public schools in the inner city don’t even have the equipment, let alone the teaching staff, to teach our kids the programming skills we are looking at. That is one of the things that is a struggle for us. We can’t do everything in an afterschool program. We need to push on that policy issue of getting access to technology and teacher training in the K-12 system. It is really lacking there now as a curriculum. There has been a focus on STEM for awhile, but not as much on the T in the STEM. We focus on the science. But we kind of let the tech piece lack throughout our educational system. That is one thing as a nation we are going to have to address if we want to make any significant progress to get our kids prepared to enter the field and fill the jobs that are going to be available over the next couple of decades.â€