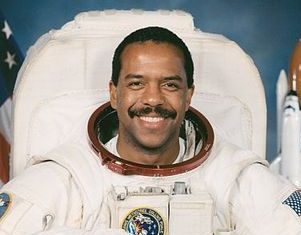 Former NASA astronaut Bernard A. Harris Jr. made history on February 9, 1995 when he became the first African American to walk in space.

After completing his residency training in 1985 at the Mayo Clinic, Dr. Harris then completed a National Research Council Fellowship at NASA Ames Research Center, Moffett Field, California. While at Ames he conducted research in the field of musculoskeletal physiology, and disuse osteoporosis, completing his fellowship in 1987. He then joined NASA Johnson Space Center as a clinical scientist and flight surgeon. His duties included clinical investigations of space adaptation and the development of countermeasures for extended duration space flight. Assigned to the Medical Science Division, he held the title of Project Manager, Exercise Countermeasure Project. Dr. Harris holds several faculty appointments. He is an associate professor in internal medicine at the University of Texas Medical Branch; an assistant professor at the Baylor College of Medicine; a clinical professor at the University of Texas School of Medicine; and is an adjunct professor at the University of Texas School of Public Health. He is a member, Board of Regents for the Texas Tech University Health Science Center in Lubbock, Texas. Fellow, American College of Physicians. He is the author and co-author of numerous scientific publications. In addition, Dr. Harris has been in group medical practice in internal medicine with both the South Texas Primary Care in San Antonio, Texas, and with the San Jose Medical Group in San Jose, California. Dr. Harris is also a licensed private pilot.

Selected by NASA in January 1990, Dr. Harris became an astronaut in July 1991. He is qualified for assignment as a mission specialist on future Space Shuttle flight crews. He served as the crew representative for Shuttle Software in the Astronaut Office Operations Development Branch. A veteran of two space flights, Dr. Harris has logged more than 438 hours in space. He was a mission specialist on STS-55 (April 26 to May 6, 1993), and was the Payload Commander on STS-63 (February 2-11, 1995).

Dr. Harris was assigned as a mission specialist on STS-55, Spacelab D-2, in August 1991, and later flew on board Columbia for ten days, (April 26 to May 6, 1993), marking the Shuttle’s one year of total flight time. Dr. Harris was part of the payload crew of Spacelab D-2, conducting a variety of research in physical and life sciences. During this flight, Dr. Harris logged over 239 hours and 4,164,183 miles in space.

Most recently, Dr. Harris was the Payload Commander on STS-63 (February 2-11, 1995), the first flight of the new joint Russian-American Space Program. Mission highlights included the rendezvous with the Russian Space Station, Mir, operation of a variety of investigations in the Spacehab module, and the deployment and retrieval of Spartan 204. During the flight, Dr. Harris became the first African-American to walk in space. He logged 198 hours, 29 minutes in space, completed 129 orbits, and traveled over 2.9 million miles.