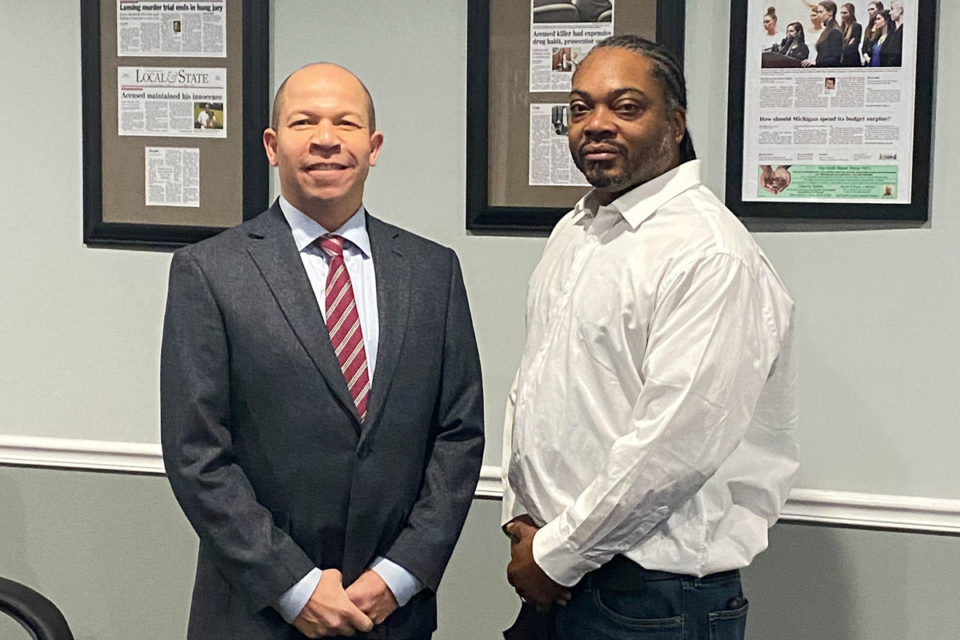 Herbert Alford (r) and his lawyer stand for a photo. Image: Twitter/@MarcuswevansSr

A Michigan man who spent almost five years in prison is suing the Hertz car rental company for failing to produce a receipt in a timely manner that would’ve proved his innocence.

Herbert Alford filed a lawsuit against the car rental company Tuesday. He was convicted of second-degree murder for a shooting Michael Adams in Lansing, Michigan. However, at the time of the shooting, Alford was renting a car at a Lansing airport about 20 miles away.

Hertz, however, was unable to produce the receipt until 2018, which led to Alford’s exoneration last year.

“Alford spent five years in custody for a crime he didn’t commit as a result,” the firm White Law P.L.L.C., which is representing Alford, said in a statement. “This would not have happened had Hertz promptly turned over a much-needed alibi receipt proving that our client was not responsible for the murder. Although our client’s charges were dropped in 2020 and he was exonerated, Alford still lost five precious years of his freedom that could have been prevented had Hertz complied in the first place.”

“While we were unable to find the historic rental record from 2011 when it was requested in 2015, we continued our good faith efforts to locate it,” Luster told CBS Wednesday. “With advances in data search in the years following, we were able to locate the rental record in 2018 and promptly provided it.”

Prosecutors also said that cell phone records would have proven Alford wasn’t the shooter as well, but the evidence was never introduced according to WLNS.

The charges weren’t dropped against Alford until last year. While it shouldn’t be hard to prove Hertz was at fault, it may not be easy for Alford to get the financial compensation he wants. Hertz filed for bankruptcy last year during the height of the pandemic claiming $19 billion in debt and more than 600,000 cars sitting idle due to pandemic restrictions.