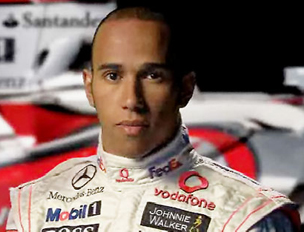 “Amazing,” the motorsports phenom told singer Elton John during the podium interviews. “I can’t find the right words to tell you how amazing this feels.”
“I love you guys and everything you do for me. For all my family, I love you all.”

Hamilton’s triumph came after a mistake by his teammate Nico Rosberg, who skidded out of the 12th turn with eight laps to go at the Circuit of the Americas, providing the gap Hamilton needed to go for the win.

“In the final laps I was thinking about my family and my dad standing in the rain watching me race, as a crazy parent thinking someday he might be a good driver,â€ HamiltonÂ told reporters after the win.Â “It’s hard to believe I’m here as a three-time champion.â€

The driver’s third U.S. win in four years took his total to 21 over two seasons. This win also makes him the first Formula One driver to win 10 or more races in consecutive seasons. Born of mixed race—with a white British mother and black British father—he is often mistouted at the “first black driver in Formula One,” —as Willy T. Ribbs tested a Formula One car in 1986— he is indeed the first driver of African heritage to win a major race at Indianapolis Motor Speedway, and joins motorsports figures like Darrell “Bubba” Wallace Jr. in the forefront of news and conversations on motorsports industry diversity.

“When I first started in Formula 1, I tried to ignore the fact that I was the first black guy ever to race in the sport,” he wrote on a blog post on his Website. “But as I got older, I’ve really started to appreciate the implications. It’s a pretty cool feeling to be a person to knock down a barrier—just like the Williams sisters did in tennis and Tiger Wood did in golf.”

The star has been known to give some of his Formula One winnings to charities including UNICEF, Great Ormond Street hospital and Children of Africa. The British driver has also been known to hobnob with U.S. entertainment heavyweights including Nicki Minaj, Will Smith and Kylie Jenner. He was even reportedly in talks with Jay Z and Roc Nation for a music deal.

He got congrats from several celebrities including Kardashian family momager and reality TV star Kris Jenner and model GiGi Hadid.

This latest success puts him in an elite group of drivers who have won Formula One’s top prize on three separate occasions.