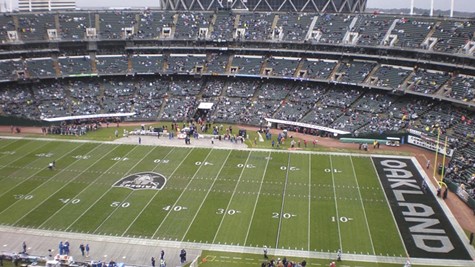 In Oakland, the push to bring back a professional football team has been slowly gaining traction and is getting closer to possibly happening. According to CBS San Francisco, a local business and investment group is interested in buying the city’s stake in the Coliseum site so they can construct a new stadium to make it more attractive for the National Football League to consider bringing a franchise opportunity back to Oakland.

The Oakland-based group, African American Sports and Entertainment Group (AASEG) is trying to become the NFL’s first Black-owned football franchise and is offering $92.5 million to buy Oakland’s portion of the Coliseum site. The site is owned by both the city of Oakland and Alameda County. The Oakland A’s have just purchased the other half from the county and they are trying to buy the remaining half from Oakland.

Ray Bobbitt, the chairman of AASEG, has stated that he has been talking to the A’s organization to try to iron out an arrangement.

In a letter that was previously sent to NFL Commissioner Roger Goodell, the Black-owned team would plan a sports stadium complex at the site of the Oakland Coliseum. The business group will not seek government funds and intends the development to be a “privately financed, developed, and operated endeavor.”

“With Oakland being such a unique place for social justice and one of the components being economic justice, equity, and equality, this is something we are grateful to be an architect of,” said Bobbitt.

Bobbitt also said he’s working to secure more people and money to turn his dream into a reality.