Black-Owned Restaurant Secures The Bag with Franchise Opportunity Within Walmart: It Started with Selling Fish on the Street 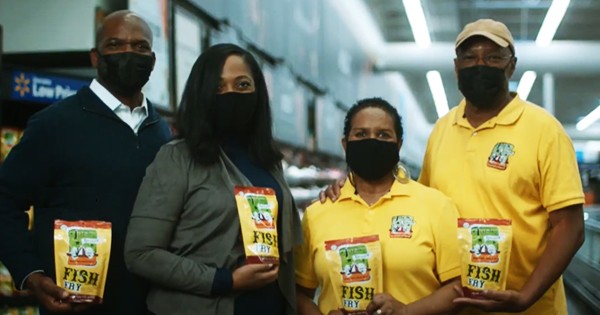 Eating comfort food and conversing with loved ones around a table seems to be long-standing tradition in many homes. From coast to coast, menu options may include indulging in piping hot pieces of fish, or other fresh seafood. And in many Black families, a designated lead cook is often known because of a signature dish or culinary skill.

An Atlanta-based company, Joe’s Gourmet, celebrates the value of old-fashioned entrepreneurship while blending it with our foodie-driven culture. Joe’s Gourmet consists of both restaurants and a tasty fish fry product, which can be spotted in Walmart stores nationwide. Founders Joseph Dowell, Jr., Patricia Dowell, Joseph Dowell III, and Maranda Walker-Dowell, are seeking driven entrepreneurs ready to win in business as they have. A rollout of the franchise is currently underway, enabling other individuals to run their own Joe’s Gourmet location.

Walker-Dowell, who is co-owner of the successful Black-owned brand, explained that the owners of Joe’s Gourmet say the restaurant concept will be expanded to launch in more existing in-store locations.

In an interview with BLACK ENTERPRISE, Walker-Dowell says the franchise opportunity concept includes selling fish, chicken or shrimp—which can be added to a salad or included on a sandwich or platter. The menu items are fried in Joe’s Gourmet fish fry, consisting of a signature blend of herbs and spices. Walker-Dowell shared that the brand’s famous fry mix does not absorb much oil. She described it as “a great product that draws people in who smell it.” People walking by eventually want to see the delicious product for themselves.

“So the (franchise) deal is available immediately. We have one store inside Walmart. We’re opening a second location. And then we have opportunities for people to franchise within the Walmart Stores. So…you’re able to do the concept, and own your own store inside a Walmart,” Walker-Dowell tells BLACK ENTERPRISE. “It’s a great opportunity because Walmart has a lot of (foot) traffic, and I think for us to be able to take advantage of partnering with such a large company, by putting your store inside of theirs. You know, it’s a company that we’ve supported for so long, and now we actually get to participate in what they’ve created, so I think it’s a great opportunity for us to have. We decided to franchise, because we wanted to share that opportunity with other people.”

The Joe’s Gourmet’s co-owner further explained some of the franchise process. It begins when an individual signs up to contact them. Next, vetting occurs to ensure that the opportunity is right for both parties. If both sides move forward, the Joe’s Gourmet team would attempt to assist the franchisee with identifying a nearby location within Walmart’s system. And when the deal becomes official, a franchisee would be trained and taught various components of the business, including how to draw in customers,  drive sales, operate the business, and market it.

Joe’s Gourmet has even been featured in a national campaign highlighting Walmart’s commitment to Black business, but the operation simply started with an ambitious Vietnam veteran, Joseph Dowell Jr., and his son, Joseph Dowell III. Along with his wife, Patricia Dowell, the elder Joseph offered hands-on help and financial support to their son. His parents made the initial investment, because it was an opportunity for a son to live out his dream.

“We started the grocery side in 2007,”  Walker-Dowell says. “ It originally started  as street vending business, so father and son were out being street vendors, going to concerts, Essence Festivals, homecomings, all of that, selling the fish of the street, building the brand. So that’s been 20 years ago, and now it has evolved to first a product, then to grocery stores, and now this franchise concept.”