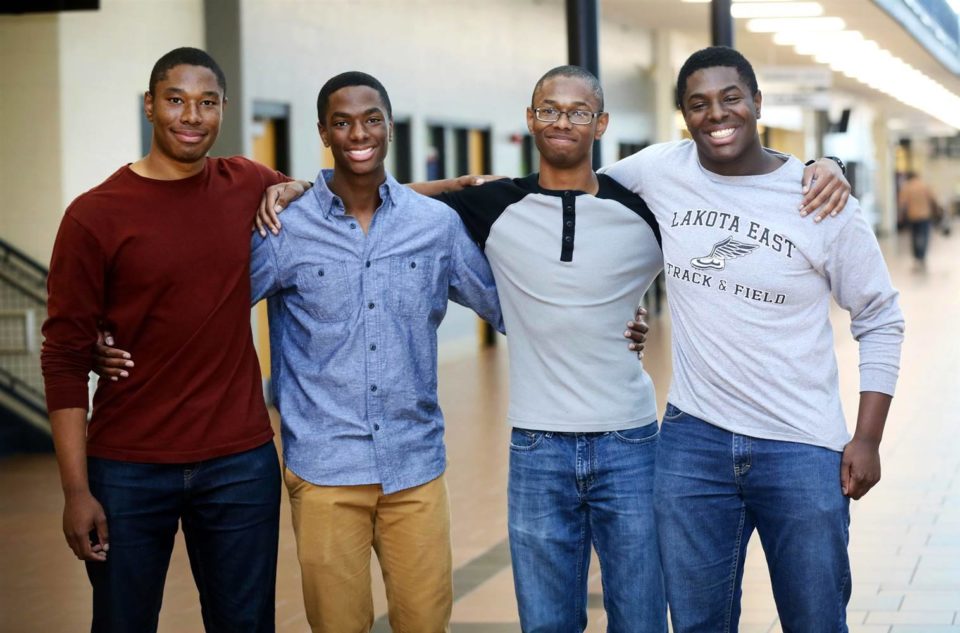 Black quadruplet brothers Aaron, Nick, Zach, and Nigel Wade, aka The Quad, aka The Wades, graduated at Yale together, but most importantly, developed their individuality.

The four small-town Ohio brothers did everything together and knew the same people for most of their childhood. However, when they were all accepted to Yale, their lives would be drastically changed, PEOPLE Magazine reported.

“In high school, we all knew the same people. So in a sense, that didn’t allow us to divert as much as we might’ve wanted to,” Nick told PEOPLE. “But in college, because there’s so many different types of people, and we had so many different diverse interests, I think we were able to carve our paths in our own way.”

The four siblings, all 22 years of age, were separated for four years as they pursued different majors and lived on different campuses.

Aaron earned a double major in computer science and psychology. Nick received a degree in political science and a minor in Arabic. Zach majored in chemical engineering and economics. Nigel completed his study in molecular, cellular, and developmental biology.

Since they graduated in May, the brothers were reunited at a local New Haven pizzeria with their parents as they waited to throw a graduation party at the home of a family friend.

Only on a rare occasion did the brothers run into each other. For example, Aaron and Nigel once had the same psychology course, albeit, it was a 2,000-person lecture that most undoubtedly incorporated online education.

“I wouldn’t just be walking on the street and just be like, ‘Oh hey, there’s my brother,'” Aaron said. “When that happened, I would be shook. I’d be like, ‘Oh my God, I completely forgot that you go to this school.'”

The experience away from home was a new one for the brothers. They had built a local reputation for having an inseparable brotherhood. However, the fork in the road was their different career paths.

The separation wasn’t too difficult on the brothers, as Nick put it, “knowing that family was just a stone’s throw away made their four years at the Ivy League school “feel more like home.”

“It’s a safety net that you already always know is there, and you know you’ll always have people to support you,” Nigel added. “There’s probably no one else on the planet who understands me better than my brothers. You know that there’s someone who’s going to be in your corner.”

While in college, Nick was involved in helping refugees and immigrants. Aaron was the musical director of a campus a cappella group. Zach was president of the National Society of Black Engineers, according to PEOPLE.

After college, the brothers look like they have a bright future ahead of them, though this time, they will be in different states:

Nick and Zach were hired at Goldman Sachs, but one lives in New York City and the other lives in San Francisco, respectively.

Aaron, who attended a ceremonial graduation with his brothers, still has to complete a semester for his senior thesis before officially graduating in December. However, it is being reported that a job at Google in New York City is waiting for him.

“For a long time, it felt like we were all a singular collective unit of a protagonist in the same show,” says Aaron. “Now, oh my God. I just get to sit back and flip through the channels in each of my brother’s lives and be like, ‘Whoa, he’s doing this and this.’ It was just cool to brag like, ‘Oh, I have three brothers, and they’re all so smart and talented.'”