When Gabrielle told the talk show diva she wanted to “remain positiveâ€ and “not focus on the negative,â€ Winfrey chimed in with, “Well, I do!,â€ and proceeded to focus far too much of the interview on her hair. And that is when I tweeted her. 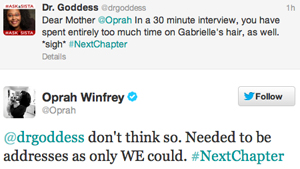 I wanted the issue to be addressed, but if we are to unpack this narrative, let us go all the way and, as I indicated, give it the full time it deserves, not to make it a disproportionate focus in a 30-minute interview with the highest-decorated gymnast in United States history. Douglas beat out the competition to win the all-around individual gymnastics gold medal and team gold–a feat no other gymnast has accomplished–and a fact Winfrey failed to mention because she was too focused on the story of Douglas being the first African-American gymnast to ever do it and her hair. Douglas did not need those heavy politics unpacked onto her 16-year-old back. My heart sank because the former “Queen of Daytime TVâ€ clearly fell into the same trap that other mainstream media outlets had perpetuated. 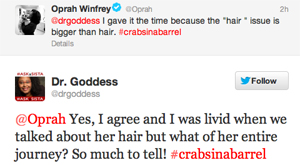 There’s great potential in continuing these honest conversations. See, in my heart of hearts, I know that Black women can save OWN from all of its turmoil. But Winfrey, Sheri an’ ‘em have to listen to us even more than they have.

A large portion of Winfrey’sÂ The Oprah Winfrey Show demographic were Midwestern white women, a factoid I learned from her interview with inestimable journalist Harry Allen. But a mainstream show and an entire network on cable television are entirely different entities. There are so many more slots to be filled, so many more audiences to engage–and Black women comprise a huge portion of that audience that’s been previously underserved.

Indeed, Winfrey’s interview with Rihanna was its second highest-rated show on the entire OWN network, and Douglas’ will probably follow suit. We also learned, via Black women’s requests and Winfrey’s responses on Twitter, that she reached out to both Beyonce and Lauryn Hill for interviews. Both artists declined. Either of those interviews would have brought epic viewership, so let us encourage Oprah to keep trying and incorporating content her most loyal viewers want to see.Â  In the meantime, a continued engagement with, and dipping into the talent pool of, Black Twitter will be a formula for success for the OWN/Harpo Productions CEO. The same goes for any brand that successfully engages the population that will give you the raw, honest and critical feedback needed and desired.

Kimberly C. Ellis, Ph.D.,Â  affectionately known as Dr. Goddess, is a scholar, artist, activist and entrepreneur who lives in Twitter, is writing a book and gives presentations and trainings on “The Bombastic Brilliance of Black Twitter.â€ Follow her @drgoddess .