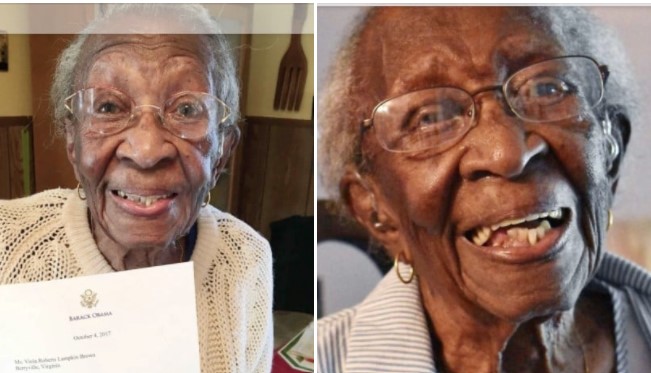 On October 4, Brown joined the exclusive club of supercentenarians — a list of people who have lived to see their 110th birthday. David Weiss, Chairman of Clarke County Board of Supervisors, proclaimed October 4 as “Viola Roberts Lampkin Brown Day.” He also presented Brown with a certificate at her birthday celebration.

“Over the course of more than a century, Viola Roberts Lampkin Brown has witnessed Clarke County’s progress and growth, which reflects the growth of our nation, and she has made extraordinary memories that are woven into her unique narrative of American history,” the proclamation said. “Centenarian Viola Roberts Lampkin Brown, who still lives in her Josephine Street home where she maintains a daily routine that includes spiritual reflection, now joins a small but extraordinary group of individuals known as supercentenarians.”

What’s the secret to Brown’s longevity? She says that her faith has allowed her to be the longest living member of her family.

“He wakes me up in the morning. He tells me what to do. I don’t worry about things,” Brown told The Christian Post in an interview.

Brown was born on Oct. 4, 1911 in Hume, Virginia. She was the youngest of her 12 brothers and sisters, Christian Headlines reported.

Brown has seen a lot during her lifetime. She was a toddler when World War I started.  She was around when the women’s suffrage movement ended and the deadly Spanish flu pandemic spread through the United States. Brown has witness segregation and affirmative action. She also saw the making of the first Black President.

Now, Brown is standing strong during the pandemic. The Christian Post reported that Brown is unvaccinated. She’s putting full faith in God to protect her during the COVID-19 pandemic. She also hasn’t depended on medications all her life.

“She never took any prescribed medication until she was 101,” Vonceil Hill, Brown’s 79-year-old daughter and only living child, shared during an interview with The Christian Post. “They put her on a low dose [medication] for high blood pressure.”

On September 20, the Gerontology Research Group noted that there are only 18 people in the world that have reached 110 or older.

Andrew Roberts, Brown’s nephew, noted that he has always felt love and joy in her presence. He believes her devotion to her faith has played an instrumental role in her life’s blessings.

“I think one of the things, in terms of her longevity, has to do with her faith,” says Roberts. “The lifestyle [she practices]. She doesn’t let a lot of things bother her. She has great capacity either to tolerate stress or just kind of eliminate it for the most part because she is centered. She’s centered on something greater than herself.”